“I ran my own race and continue to do so to this day,” said the inaugural women’s marathon gold medalist. “I’m a ‘has been’ who still has a passion for the sport.”

She marveled at the athletes around her and their stories.

“It’s all about the story. I hope we don’t lose sight of the storytelling.”

Ethiopia’s Genzebe Dibaba ran a stellar 14:25.22 5,000m, and while she came short of her announced world record attempt on her sister Tirunesh’s 14:11.15, she gave an impressive display of mental toughness as she ran unheaded most of the way.

Kenya’s Celliphine Chespol upset world record holder Ruth Chebet in the 3,000m steeplechase and ran 8:58.78, the fastest-ever on US soil. Just missing the sub-9:00 mark was compatriot Beatrice Chepkoech in 9:00.70. Chespol lost her shoe on the penultimate water jump, put it back on, and sprinted back over the last 500m to win. She is 18.

Emma Coburn missed her US steeplechase record by .33 seconds with her 9:07.96. “I should have leaned,” she said, “and I would have had the record.”

And what defines teenage?

Tomorrow is a packed day with some of the deepest fields ever assembled outside the World and Olympic championships. 9 events in this meet have the gold, silver, and bronze medalists from Rio.

Meanwhile, I learned much from two interview experiences.

Tatsiana Khaladovich threw the javelin 66.30 to win by more than a meter over China’s emerging star Shiying Liu.

I had looked forward to interviewing Khaladovich after not having had the opportunity in Rio.

As I’m a little rusty on my Belarussian, that interview went up in smoke.

I’m going to print verbatim what I wrote in the media tent; read on for what happened next.

From the media tent:

China’s Shiying Liu was prepared for the interviews, even though she doesn’t speak a word of English. She had a translator with her (unclear if this was her coach), and she answered every question with aplomb. Her translator was equally gracious and patient, and I left wondering if there were any better ambassadors of their country’s sport in the house this evening – and that’s saying a lot given the plethora of athletes who fit that bill so well.

It was impressive to see the Chinese so well-prepared for the important aspects of the meet beyond the competition venues.

Some mark China’s rise in track and field from the Beijing Olympics; others mark their arrival at the 2015 World Championships.

Either way, this country knows what it’s doing.

I packed up my tech gear and walked straight into the Chinese translator!

Turns out he is Yujia “Tony” Dou and he is a reporter for the Chinese national team. He is the Founder and Chief Editor of Top Athletics We-Media of China, and he also runs a track and field camp. He travels with the team and supports them especially, he said, when the team sends only a few athletes to a meet.

He handed me his card after I had given him mine, and the exchange reminded me that I am off my card presentation game.

I certainly should have remembered the etiquette from Beijing: thumbs on top, two fingers below, and always - always - presented with a bow.

Together, Liu and Dou showed every delegation how it's done.

Correction: I said on twitter tonight that Chespol was the first under 9:00 in the steeplechase in a US race. Not so. Ruth Jebet ducked under by .03 last year at the Pre Meet. Chespol is indeed now the fastest ever on US soil.
Posted by Mark Cullen at 12:01 AM 2 comments:

He exits the hotel just before me.

He starts to walk across a vast, darkening parking lot.

He is World Champion, as new to the scene as a world champion can be.

He has not competed in Eugene before, or the US.

I wonder which America he knows.

I slow my pace; my odd tempo attracts his attention.

I slow even more; he turns and looks again.

He proceeds towards the shopping center.

I wait several minutes, then drive in his direction, but I’ve lost him.

I return to the hotel and wait in the lobby, under the guise of writing.

At last he returns.

He removes his hoodie.

He glances at me; we begin to talk.

I read a story I wrote about him the day he became World Champion.

As he turns to go to his room we exchange gentle, awkward waves. 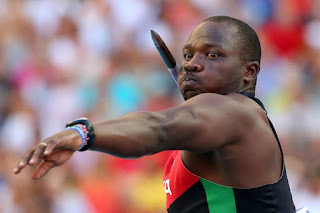 My encounter with Kenya's javelin World Champion and Olympic silver medalist Julius Yego took place at Eugene's Valley River Inn on May 28, 2016, on the evening following that day's Prefontaine Classic, where he finished second in the javelin in his US/Eugene debut.

Here is the story I was privileged to read to him:
http://www.trackerati.com/2015/08/watching-history.html

It's Not Queen Enough!

2008 US 400m hurdles Olympian and 2010 Bowerman Award winner Queen Harrison starred in an episode of the US reality TV hit “Say Yes to the Dress” Saturday evening.

Harrison famously received her marriage proposal from three-time Olympic medalist Will Claye when he bounded into the stands after winning triple jump silver in Rio.

Here’s a clip from the Saturday, May 13, episode:
https://www.tlc.com/tv-shows/say-yes-to-the-dress/videos/nightgown-vibes
(The entire segment has not yet been posted on the TLC channel’s website.)

Memorably, when Harrison turned down the first dress she tried on she said, “It’s not wedding enough!”

Nor was it Queen enough.

It’s terrific to see a US track and field athlete gain such widespread social media exposure, especially in a setting beyond the track.

The attempt to break 2 hours in the men's marathon is on tonight.

Here is the link: https://www.youtube.com/watch?v=uvhSgxUdsdQ

A couple of thoughts:

1. The goal pace is unsustainable. The bonking will begin earlier than most expect; this attempt will be over by 20 miles - 21 on a great day for Kipchoge. No one will break 2:05.

It pains me to say this, as Eliud Kipchoge is in so many ways one of my favorite runners - one of my favorite people in the sport. I have nothing but admiration for the Olympic champion who was a world champion at age 19 at 5,000m and who reinvented himself after a long downturn in his career as one of the three greatest marathoners in history.

This is a misguided effort. It is using every technical advantage available in terms of equipment and pacer strategy - shoes with a well-advertised 4% advantage as well as pacers jumping in and out, an acknowledged violation of international rules.

If successful in breaking either 2:00:00 or the world record of 2:02:57 it will come with multiple asterisks and will be as unwieldy as a discussion of the women's marathon world record - Paula Radcliffe's male pacer-assisted 2:15:25 or Mary Keitany's 2:17:01 in a women's only race? Which is it?

Do I secretly hope to see a sub-2:00:00? Any barrier is intriguing and clearly this attempt is bringing attention to the sport.

But it's the wrong kind. The very setup acknowledges that going beyond the standards of the sport is the only way breaking 2:00:00 can currently be accomplished.

This dishonors the man in the future who is the first to break this most unlikely of barriers legitimately and according to the rules. Imagine if Roger Bannister had had a different pacer jump in for every 400m.

This attempt is bad for our sport.

(Note: I added the Bannister observation about 35 minutes into the race. It came from an idea that occurred to me during an online conversation with my nephew about the sub-2 attempt and what it meant to have fresh pacers the whole way.)