Twitter - 4:00pm, Saturday, May, 26:
4th place doesn't always get the attention it should.
Sometimes, it gets all the attention in the world.
Norway's Jakob Ingebrigtsen was 4th in the @nikepreclassic culminating event, the Bowerman mile.
His time: 3:52.28.
His age: 17.
His age: 17.
Just checking.
Yup, still 17.

History was made in Saturday’s Prefontaine Classic when Norway’s 17-year-old phenom Jakob Ingebrigtsen ran the mile in 3:52.28, a previously unthinkable performance.

“I wasn’t quite expecting the race to be that fast,” said Norway’s prodigy. “Of course, the pace was a bit quick the first couple of laps. I had a lot more to give the last lap and it felt really good coming into the homestretch.”

“My goal was to take Alan Webb’s record. I knew, of course, that was going to be tough. I had a PB in mind but today I felt really good and I am really happy with how it turned out.”

“I was hoping the other guys would run fast from the beginning and they did, so I just tried to keep up with the guys the first laps and then we’ll see how it goes. I had a really good last lap, so it felt good.”

“Before the race there was a lot of nerves because it’s crazy running here in Hayward Field and the crowd is amazing, of course, and I was really looking forward to racing.

“I felt good today,” said Ingebrigtsen, “and decided to give everything when there was 800m left.”

“I am really looking forward to that,” he said of World Juniors with a smile that was an unsuccessful attempt at a poker face.

When asked if he had seen Alan Webb, who was in attendance at the meet, Ingebrigtsen smiled and replied, “No, I haven’t seen him – I did get his record so I’m real happy.”

“I was thinking it was going to be tough to beat Webb’s record,” he said, nodding towards the scoreboard, “but I’ve seen the results when I was finished and it was just amazing.”

Ingebrigtsen has an unusual training advantage.

“Now I’m taking a new step to the big guys. It feels really good racing them today and beating a couple of them as well.”

In the second half of the race he moved from 14th to 4th in a field of 15 of the world’s best milers.

As Ingebrigtsen sped down the homestretch, he realized that Kenya’s 2017 World Champion Elijah Manangoi was just ahead of him.

“When I saw it was Manangoi I was just like ‘WOW!’”

He finished one-tenth of a second behind the World Champion.

“It’s a dream come true to be racing against the best guys in the world.”

The text I led with is a tweet I sent out on Twitter at the end of the meet. An indication of the Norwegian’s popularity - as well as the importance of his performance - is that within 24 hours this message had been retweeted 53 times and ‘liked’ another 254.

It was interesting to follow the pattern of the response, as Ingebrigsten ran his remarkable time just before midnight in Norway, and I woke up in Eugene Sunday morning to many responses from that part of the globe.


Ingebrigtsen's time as a 17-year-old is over two seconds faster
than Steve Prefontaine's 3:54.6,
with the understanding that the mile was not the focus of Pre's training program.

Posted by Mark Cullen at 4:30 PM No comments:

The weather forecast for Eugene is perfect - for Sunday, when it will be 75F/24C and sunny.

But the Prefontaine Classic is today (Sat), and it has dawned cool and chilly in Eugene - 43/6. It's partly cloudy with some drizzle forecast for this morning, but it should be clear and 65/18 by the time the broadcast goes international at 1:00pm Pacific time. The all-important wind forecast is for a gentle 5mph, but who knows how that will be translated in the funnel that is sometimes Hayward Field.

Last night's opening session of the Prefontaine Classic, once billed as Distance Night in Eugene, featured distance alright - it's just that distance was in the men's javelin, not the much anticipated and ballyhooed men's two-mile.

As expected, the German trio who are currently dominating the world scene in the greatest display of creditable throwing ever by a nation went 1-2-3.

As for the men's two-mile, there is always danger in advertising a record attempt when anything less - even a great performance - becomes a disappointment. 18 year old World Indoor silver medalist Selemon Barega topped a deep field by outsprinting Paul Chelimo to win in 8:20.01. Had Chelimo not advertised an attempt on Matt Tegenkamp's US record of 8:07.07, the post-race focus might well have been where it should have been: on a savvy run by a teenage sensation who left some of the current greats in his dust.

The meet resumes today at 12:40 with the women's pole vault; distance events begin with the International Mile at 12:48. I predict upwards of 9 sub-4:00 miles in this race.

Or as we like to call it in Eugene, the JV race.

The traditional finish to the meet is the Bowerman mile at 2:52. That's the starting time, not the 1200m split.

While the 400m is always of interest, it just doesn't rank as high to me as 400m when you're jumping over things. Nonetheless, the women's 400m is intriguing today.

World Champion and Oregon graduate Phyllis Francis -  wait a minute! This is Eugene, so that would be: Oregon graduate and World Champion Phyllis Francis - has a terrific opportunity to cement her position in the top ranks of this event, while Bahamas' Shaunae Miller-Uibo just might want to unravel that storyline. Adding to the intrigue is that it's the first outdoor 400m for each this season.

See here one of Trackerati's greatest highlights of the London World Championships:

Many have tried to pick the best field of the stunningly deep events at tonight and tomorrow's Prefontaine Classic. You might do better to try to find the least loaded field, but even that is a challenge.

My pick for the event with greatest depth is indeed a field event - the men's javelin, which will feature Germany's trio of throwers over 91 meters: Johannes Vetter, Thomas Rohler, and Andreas Hoffman. Rohler won Olympic gold in Rio while Vetter upset Rohler for World gold in London in 2017. Will the javelins even stay within the competition area? Officials will be well advised to stay clear the of landing area.

Hoffman's personal best stands at 91.07/298-9; perhaps he'll join his compatriots over 300' tonight. All will rest on Hayward Field's notoriously pesky wind. If it's in the throwers' faces the competition will be terrific but the distances less so. Here's hoping for a calm wind.

Trackerati will be on site of the 2018 Prefontaine Classic tonight and tomorrow, 5/25+26. Please check here as well as @trackerati on Twitter for reports and updates. 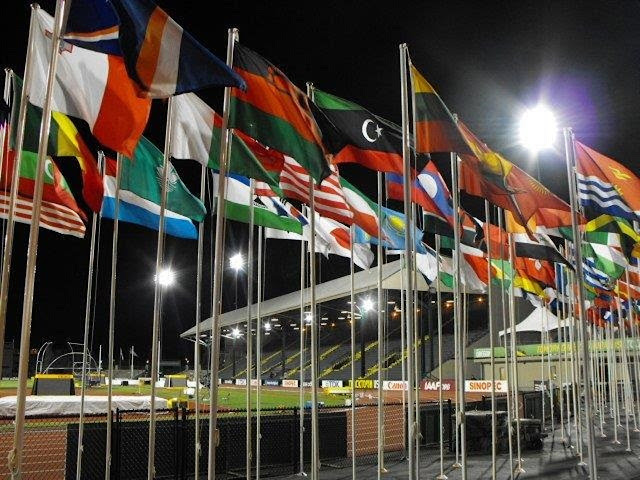 Posted by Mark Cullen at 6:28 AM No comments: