The Great Race is a fund-raiser for Muscular Dystrophy, held annually between the University of Oregon and Oregon State in conjunction with the heated football rivalry known - unfortunately - as The Civil War. Oregon’s early ‘70s 800m star, Steve Bence, wrote an engaging story featuring the 1974 Great Race, in which he focused both on Steve Prefontaine’s role as anchor and on the meaning the race came to have for Pre (links below).

A full team was full - 45 runners. All but the final four miles were run on Friday, and the race finished in the host's stadium at half-time of Saturday's football game. The time differential was applied to Saturday’s first runners and the race to the stadium was on.

I ran the Great Race, likely in '73. Bence noted that his t-shirt – green printing on yellow – was what he was wearing in Nike’s first product catalogue. My shirt is red on white, with the name “SWEETSER” on the back in honor of the women’s dormitory which sponsored my leg of the relay. As much as I'd like to be able to say I ran a race anchored by Pre, I do think we ran it in different years.

On race day, the air was rife with dark rumors of previous mischievous predations, of runners purposely misdirected to the wrong level of the stadium. This happened in Corvallis, of course, as my beloved Ducks would never stoop to such tactics.

I rode a bus on race day and was dropped off well down the road on Highway 99. In a day of no cell phones or instant communication, an occasional cyclist came by with a report of a substantial Oregon lead – much to my relief. As a relatively new runner, the last thing I wanted was the pressure of protecting a marginal lead.

In spite of the heat that accompanies the football rivalry, this race did much to better relations between the two universities, as 41 pairs of supposed adversaries stood together awaiting our turns. My Oregon State counterpart and I stood out there for a long time - upwards of an hour - with just each other to speak with.

I remember his last name – Renfro – a familiar name in athletics in the state of Oregon in those days, though this Renfro was not a famous athlete, nor was he related to Mel, the legendary U of O football and track and field star and NFL Hall of Famer.

This Renfro certainly appeared to be a good athlete, however. Tall and strong, with easy confidence in his athleticism.

I thought I was doomed in the event of a close race.

We talked and got to know each other, and he seemed altogether reasonable for someone from Oregon State - all things considered.

We’d warm up together only to warm down again.

As the batons approached, more and more people came by.

'It’s getting closer,' they reported.

As the lead vehicle approached with flashing lights, my worst nightmare came true.

Two runners running together stride for stride after almost 30 miles.

Mr. Renfro and I got our batons simultaneously.

Panic is a strong motivator and I likely could have paced Roger Bannister for my first quarter mile. I had the lead, but there were three quarters to go.

A car pulled up beside me and Duck cheerleaders and fans screamed their support.

Pride is a strong motivator.

So is the distinct possibility of abject humiliation.

Mr. Renfro pulled up to me as I tired, and we settled into a more reasonable pace.

Much was on the line, not the least of which was the possibility of my having to explain to Bill Bowerman and Bill Dellinger how I lost the lead for the U of O. The '72 Olympic Coach and his Olympic 5k bronze medalist successor were my running class teachers in different years.

I was told I broke five minutes that day out there on Route 99.

Of course, that was in a mile measured by the odometer of a car, then the universal standard of measurement.

But Mr. Renfro was not a miler. Like me, he was roped into this event at the last minute. I pulled away in the last quarter mile and handed the lead to my successor.

The matter was settled fair and square at halftime of the football game the next day, and with a narrow Oregon win.

I have the t-shirt still: 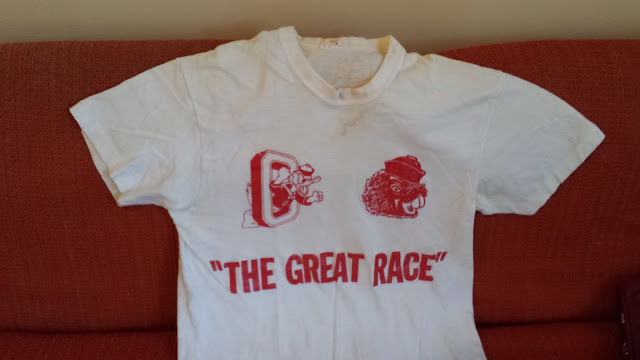 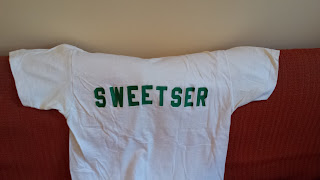 At a time of divisiveness and fear - Bence’s article was posted on the Track and Field News website at midpoint between Paris and San Bernardino - I take heart in the memory of all these pairs of young men strung out along the Oregon countryside. Mr. Renfro and I were just two enthusiastic students pleased as punch to be representing our universities, gracious and polite to each other and searching for ways to keep the conversation going.

Kind and respectful, encouraging and supportive, we put the ‘civil’ back into this Civil War. He and I exchanged exactly the same words as the batons approached: “Good luck.”

I’ve always wondered what the other conversations were like that day, as runners from rival schools would have to negotiate the social minefield that would be ours when we returned to our dormitories and fraternities. What on earth would we say when we got back to our respective camps – that the other runner was a surprisingly respectable guy?

Many thanks to Steve Bence for taking the time - in the middle of the holidays - to communicate with me about The Great Race. A tremendous help and much appreciated.

In addition to its posting on the Track and Field News website, Bence's article has appeared at:
http://www.stevestandf.com/intersting-articals/prefontaine---civil-war-relay

and on Doug Binder's trackfocus.com website where the piece is available as an ebook:
http://www.trackfocus.com/gprofile.php?do=title&title_id=820&mgroup_id=45597

There are all sorts of research issues attendant to a race this old and with such thin documentation. An interesting one is: how far is it from Eugene to Corvallis? Not as simple an answer as you might think - I have three different sources with three different distances and therefore different numbers of runners. I have used the 45 legs statistic (41 run on Friday, 4 on Saturday) published in the Eugene Register-Guard on November 17, 1972, as it is the most contemporary reference I've found.

The Great Race was a men's only relay (varsity women's track and field and cross country were club sports then), but I'm happy to report that in its current iteration, the race is, of course, co-ed. The race still exists but in substantially modified form (sadly, it looks as thought the high entry fee would prohibit most university students from participating now):
http://runoregonblog.com/2015/11/06/race-preview-2015-civil-war-relay/


Bence's prominence on the University of Oregon track and cross country teams is not ever to be understated, as these program covers attest: 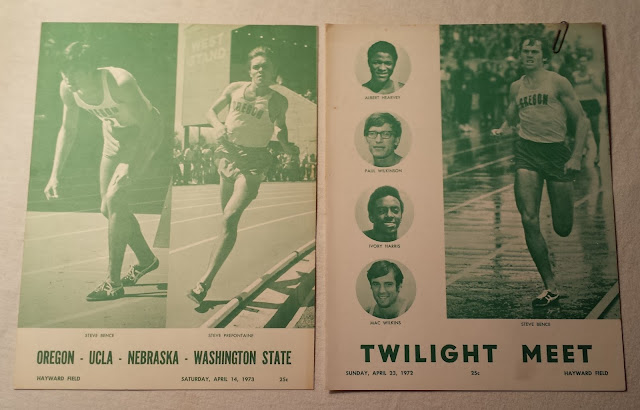 When you're sharing the program cover of an Oregon home meet with Steve Prefontaine... that's correct: 'nuff said.

(Programs from my personal collection.)

I would be grateful for any correspondence which would shed further light on the history of The Great Race.