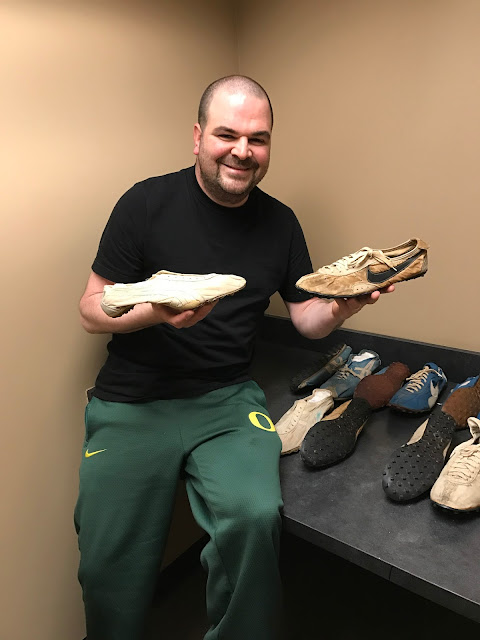 "No surface is good enough for these shoes!”

Jordy Geller was cleaning a display table in a bank vault in Portland, OR.

Don’t mess with Geller when it comes to early Nike running shoes.

Geller is famous in the collecting world as the founder and curator of the “ShoeZeum,” his collection of almost 2500 athletic shoes which first was on display in San Diego and then Las Vegas. An attorney with an MBA, he is the pre-eminent collector in the United States.

Geller was eager to show me his iconic Moon Shoes, so-called because their revolutionary waffle sole made a footprint reminiscent of that of the earliest astronauts on the moon.

They are the Mona Lisa of the collecting world.

Mona’s nice but she’s just not a Moon Shoe.

For a company for which there is no finish line, the Covert Moon Shoes have become iconic for having crossed a finish line first.

To be clear, three pairs of Nikes were ahead of Covert's in that same race, but Covert's were the first with the waffle sole that transformed the industry. Well over 40 years later, the runners I coach wear their direct descendants.


Our meeting was a long time coming. Geller had kindly invited me to a public unveiling of the shoes the previous June, but as his event was in Portland the night before the last day of school for this longtime Seattle teacher, alas, for me the unveiling had to wait.

I have never tried to add to a collection of running shoes and memorabilia I amassed while running at the University of Oregon in the early 1970s, and so I am more archivist than collector. My treasures are the archive of a college kid who happened to be in Eugene as Blue Ribbon Sports morphed into Nike.

Talk about being in the right place at the right time: I started running in Bill Bowerman’s beginning running class in September of 1971. While most remember him for inventing the waffle-soled shoe and co-founding Nike, I was awestruck that the man who had just come out of the tunnel at Hayward Field to teach our PE class had been named head coach of the US Olympic track and field team the week before.

When I got to the bank vault, Geller had more than the Covert Moon Shoes on display. He had brought two pairs of Blue Moon shoes, handmade by Bowerman, as well as the white Progressive Moons, also the product of genius.

Geller brought the single shoe found buried on Bowerman’s property with the original waffle iron. I was spellbound by this shoe and found it hard to take my eyes off it. How utterly remarkable that it survived, and in relatively good condition.


My collection pales in comparison to Geller’s in terms of numbers, yet I do have some gems. I surprised Geller by bringing the three pairs of my shoes which best represent the development of Nike and its transition from Blue Ribbon Sports:

-        Waffle Trainer prototypes handmade by Dennis Vixie, the podiatrist in Eugene who  doubled as my orthotician and one of the earliest designers for Nike.

Our shoes formed a remarkable display of the earliest Blue Ribbon Sports and Nike shoes. Have there ever been this many Moon Shoes in the same place at the same time? It had been a long time since a merged collection of these iconic shoes had occupied the same space – likely not since they were first made as long as 46 years ago, if then.

Much discussion between us focused on how we can make our treasures more widely available for public viewing. While these discussions are in the early stages, it was terrific to find common intent.

I also brought several pieces of my memorabilia collection, including Nike’s first product catalogue, Bowerman signatures, and a t-shirt with a logo of Gerry Lindgren’s Stinky Foot, his late, lamented Tacoma running store.

I mean, when was the last time you saw a Stinky Foot logo?

That’s what I thought. 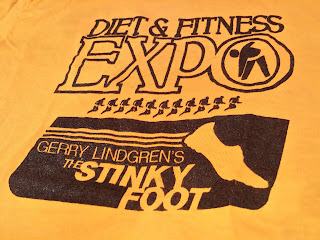 The power of these shoes – their draw – astonishes me every time. At Indoor Worlds I was interviewed by ’96 Olympic decathlon gold medalist Dan O’Brien for USATF’s Cool Down program. The attraction, of course, was my shoes, and this interview drew an audience larger than every other one of the entire global championships. A close second was their interview with Michelle Carter, which makes me one of the very few people on the planet to have notched a win over the Olympic shot put gold medalist in 2016.

During the course of our hour-and-half meeting - very generous on the Gellers’ part as they have a five-month-old daughter at home - our discussion of the early Nike era turned to Steve Prefontaine and Geller noted his friendship with Pre’s sister, Linda.

Came the email the next day: “Linda Prefontaine wants to share your Steve story on Facebook. She asked me to ask you if that’s OK.”

My story is about about what happened between Prefontaine and me the day he won the 1972 Olympic Trials 5,000m race. When Thomas Byrne of IAAF’s Spikes Magazine approached me before the Prefontaine Classic last year and asked if SpikesMag could post the story, I quickly agreed, and it went viral within the track and field world.

The response to Linda Prefontaine’s post on Facebook was quite similar: the engagement rate was remarkable. Linda and I had some memorable exchanges and we’ve agreed to meet at this year’s Pre Classic.

A longtime Facebook holdout, I figured this was as compelling a time to join as any. Now I find I’m friends with relatives – what a concept! – as well as with most of the East African distance running community.

Who knew? Here I thought that life as we knew it had ended when ‘friend’ became a verb.

I didn’t quite tell Geller what I was up to, and it was not until eight days later that I finally returned the shoes to their safe deposit boxes in Seattle.

It was spring break when I left Portland, and I traveled to Hood River in the Columbia River Gorge, long my favorite Pacific Northwest getaway place. I spent three days there with the shoes in tow.

I am quite sure that Geller is apoplectic at the thought, but I have traveled with my treasures before and follow the advice of a cousin who was in the insurance industry for many years: tape them to your chest. Well, not quite, but when I say that they were never out of my sight, that is quite literally true.

I crossed the high desert of Central Oregon and made my way to Bend, site of this year’s US National Cross Country Championships and high on my list of places to live once I conclude my 40+ year teaching gig.

I dropped by Teague Hatfield’s Footzone running store and had the pleasure of meeting him and the staff, including Barb who, memorably, convinced a very busy Hatfield that he really should come out of his office to meet this guy who just showed up with a bunch of old running shoes.

The fun of this collection is exactly what happened in the store that day: the excitement of the unexpected, the common language, the shared history and context - the not needing to explain.

So it is now with Geller and me. Two peas in a pod are we, new friends who share a common passion. Even more, we share a deep, heartfelt appreciation for what we have in these old shoes. From the intricate stitching to the ‘fat swoosh’ (it was not always so sleek) to the progression of the waffle material in its different iterations, we appreciate the thoughtful decisions evident in every single design element.

We are grateful for the shared, unabashed understanding that these shoes touch our souls.


Footzone Running Store in Bend, OR
http://www.footzonebend.com/
Posted by Mark Cullen at 11:02 PM