An Olympic Trials 4th of July

The 4th of July began early at the US Olympic Track and Field Trials.

Or actually it began late.

It began the night of the 3rd with a fireworks display at Autzen Stadium, one the entire city heard at 10:30 – no one could escape it.

Including athletes trying to sleep the night before their events.

So, not a great start to a great 4th of July in Eugene.

The day itself dawned cool, sunny, spectacular – truly not a cloud in the sky. 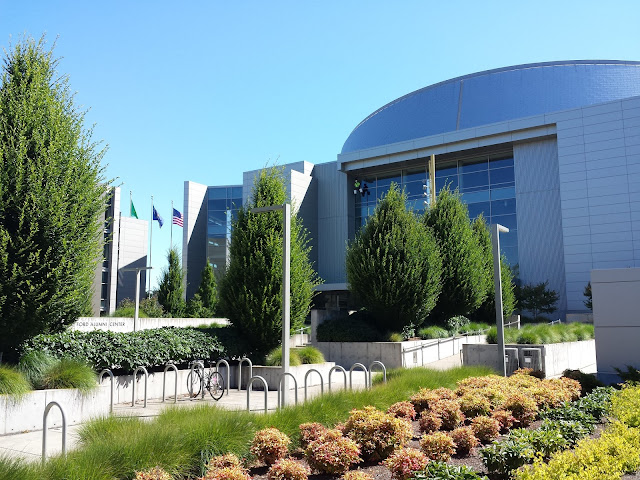 Matthew Knight Arena on the 4th of July

One option visitors have is to stay in the dormitories at the University of Oregon. Deal of a lifetime. $99.00 a day - including three meals - when motels across the street are going for $300-500 a night.

This is a throwback for me as I lived in these same dormitories in the early ‘70s when I was an undergraduate here. I lived in Dyment – rhymes with cement – and how many people can claim they lived in a dorm so aptly named for undergraduate life?

It’s no coincidence that Animal House was filmed on this campus several years later. I’ll move on so as to protect the guilty.

An interesting aspect of dormitory life this time is that one of the entry gates to Hayward Field is half a block away. I rise every morning to the sight of growing lines of fans waiting to go through security, and with protective fences, concrete blocks, federal marshals, and bomb-sniffing dogs, we are reminded at every turn that track and field heaven is part of the real world. 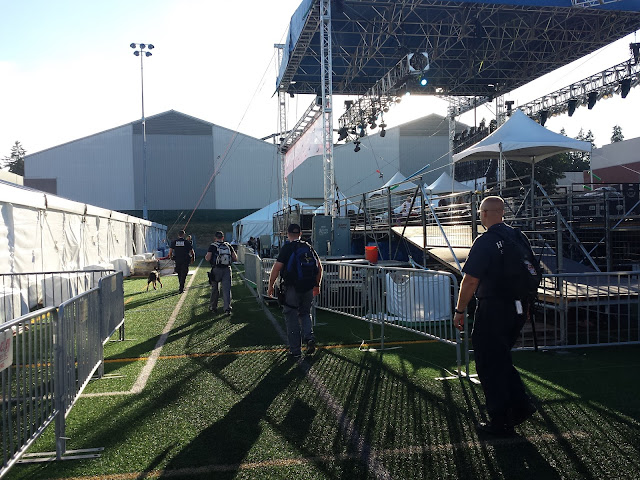 I look forward to breakfast every morning, a place where new friends are made and old are renewed. We discuss upcoming events and rehash yesterday’s controversies. On this holiday morning I sit with newer friends, ones I’ve gotten to know since returning to writing and starting my blog three years ago. We have an animated discussion about the men’s long jump and the qualifying process for the Olympics; we leave having clarified what we don’t know.

One of the characteristics of an event such as the Trials is what goes on beyond the track. A writer’s life can be pretty constrained during an event like this. In my first three days here, my life took place in a three-block radius: from my dorm to Hayward Field in one direction and to the dining hall in the other. Not a bad radius when you think of it.

The late holiday start times at the track make possible a number of options for visitors, and the Track and Field Writers of America (TAFWA) hosts a morning social at the self-styled unofficial social center of the Trials, the Wild Duck restaurant. First I speak with several of the eminent LetsRun.com crew and finally I meet Steve Soprano, their mysterious “employee 1.1,” who has been so good to me with linking to my articles on their heavily trafficked front page. I sit with Cheryl Treworgy, who as Cheryl Bridges set the world marathon record of 2:49:40 in the 1971 Culver City marathon and became the first woman ever under 2:50.

Treworgy has a very successful photography business called PrettySporty; she is a familiar face at sporting events around the country, including many beyond track and field. She is immensely proud of her two daughters and we speak for some time about daughter Maggie’s service work in Africa. Cheryl and I are teachers, and we have much to discuss about service, purpose, and the magic of reaching a child. We also speak about her daughter, Shalane, who, like her mother, runs a fair marathon, and will in Rio.

Next stop is the Caspian restaurant for lunch with friends. The Caspian is a couple of storefronts down from the Duck Bookstore on the west side of campus. It’s my favorite restaurant in Eugene; there is something for everyone. While it focuses on Mediterranean food, it has an expansive menu that will keep even the most enthusiastic carnivores satisfied. Best of all for writing late, it’s open until 2:25am on weekends and 11:45pm on weeknights.

It’s here I met Curtis Beach’s parents the night he waved Ashton Eaton home to a world record in 2012. I told them it’s one of the greatest acts of sportsmanship I’ve ever seen.

To the stadium after lunch and a meeting with my longtime friend, Carol Coram, who sits on the Jury of Appeals. I always wish Carol an uneventful day… and then there was the women’s 800m. I tried. 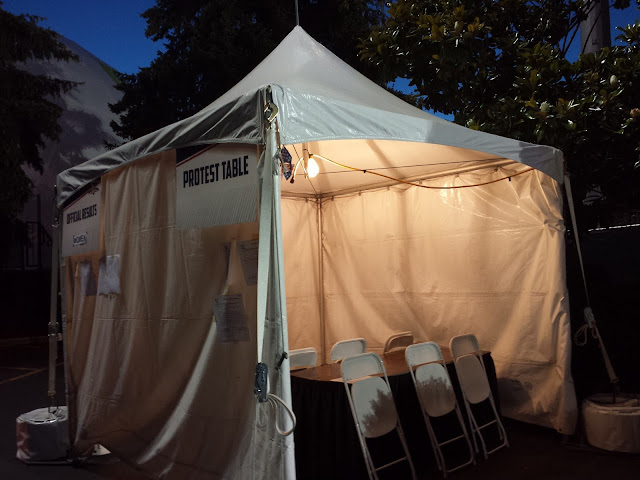 Enough for One Day

John Nunn won the Olympic Trials 20k race in Salem last Thursday; I interviewed him there twice, once one-on-one and the other as part of the group interview after the awards ceremony on the Capitol steps. Later that evening in Eugene, I was at the campus alumni center to pick up my accreditation and was directed to sit in a specific chair.

At the appeals tent today, two men sit down to discuss the appeals process; one is an athlete liaison and advocate.

We walk out together and agree it’s time for me to do an article about him, the universe having spoken rather clearly on this matter. 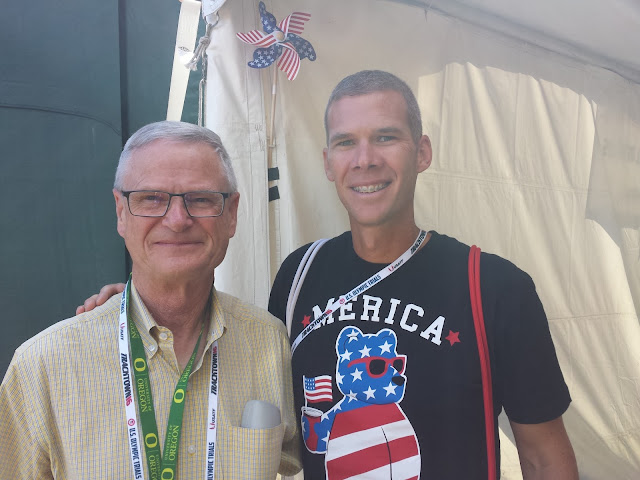 Olympian John Nunn with that stalkerish trackerati guy. No, no - Nunn's on the right!

The women’s steeplechase rounds are first up on the track, followed by the men’s. Next are the men’s 5k heats, and this sequence causes me some confusion. After 5 steeplechase heats I keep expecting the 5,000m runners to jump over something.

I have an idea about how to approach the 4th of July interviews with the athletes; it’s time to have some fun. I ask athletes who have advanced to the next round or who have just made the Olympic team, “So, how’s your 4th of July going so far?”

Bridget Franek, who had just won her steeplechase heat: “Going pretty well so far, I’d say! Came with my nice 4th of July glasses and hat so I was ready to go and then that happened (winning her heat), so it’s a good one!”

Shalaya Kipp, who advanced to the steeplechase finals: “You know, it’s really great! It’s a really good 4th of July.”

Clayton Murphy, who won the 800m with a Wottle-esque kick: “I told Boris: I’d love to be on a boat right now and having hamburgers and grilling out with the family, but running the Olympic Trials on the 4th of July is cool. So I’d say the 4th of July is going pretty well. A boat does sound nice and floating down the river on the 4th of July - but I think this is pretty good, this is better.” 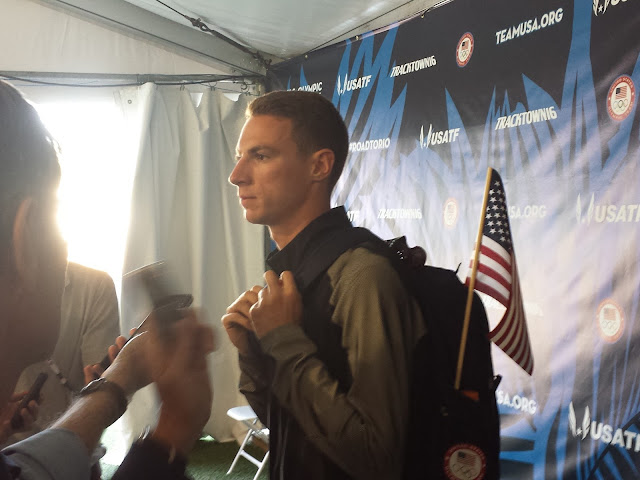 Boris Berian, who made the Olympic team in 2nd behind Murphy: “I’ll save the boat – that is definitely a fun thing to do – I’ll save that for later. I’m just proud to be an Olympian now.” 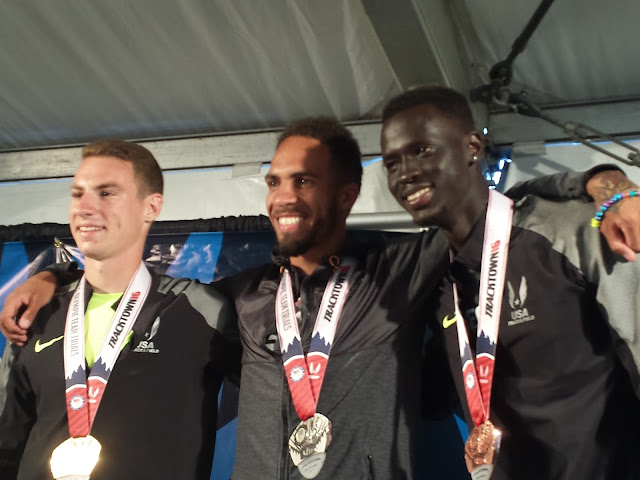 Charles Jock, third member of the 800m squad, turns to Berian and says, “Well, I think you’ve still got some time to go floating down the river!” 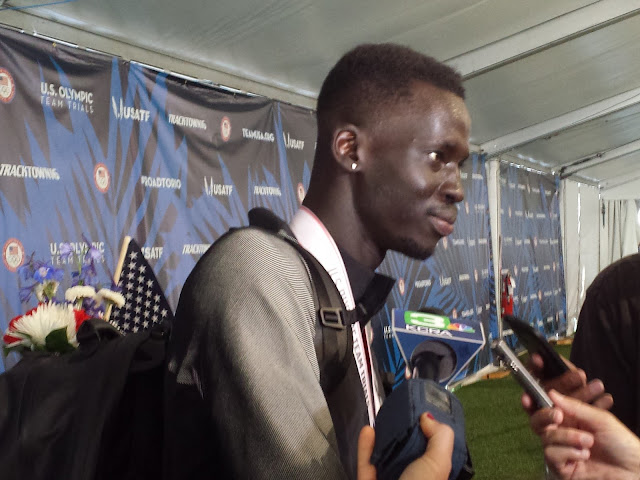 Chrishuna Williams: When I ask the question, the 800m third-placer grabs the microphone and says, “I’ll answer that!” 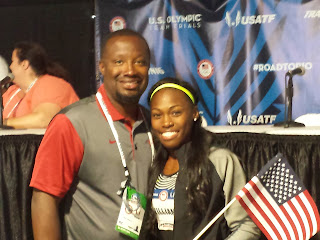 “As soon as I crossed the line I saw that my name, Chrishuna Williams, had the 3rd position, and just to represent the red, white, and blue and have USA across my chest on the 4th of July – I’m very ecstatic!” 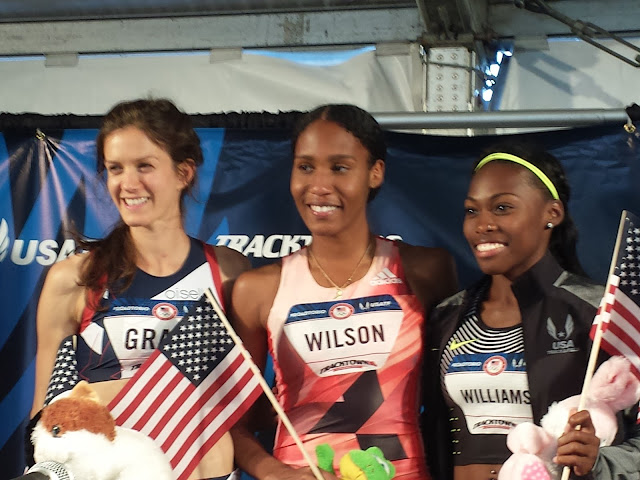 The fun in this question is that it was unexpected.  When I asked it in both 800m press conferences, the athletes cracked up laughing each time. They are so used to similar questions, race after race, year after year. The grace of Allyson Felix, for example, is how she makes it appear she’s answering each question for the first time. 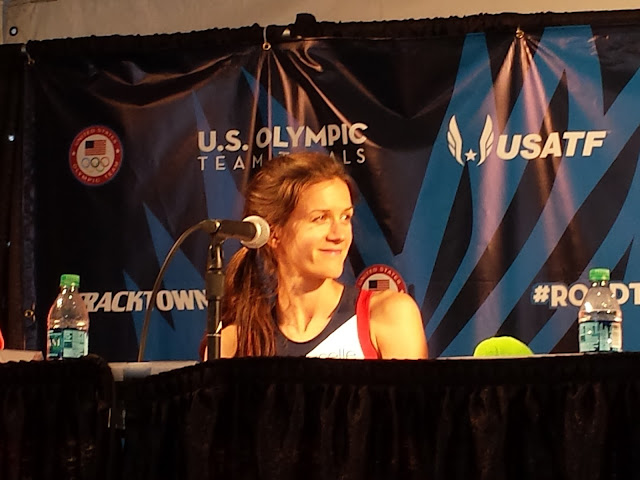 No one has as much grace as Kate.

I return to the stadium and bid farewell to my press row neighbor, Caitlyn Pilkington, a rising star who is now with Women's Running Magazine. She has covered the first half of the Trials and her publisher will be here for the second. We've made a nice connection and I know this is the first time we'll say farewell but by no means the last. Sun sets on a dazzling 4th of July at Hayward Field

I remain in the stadium and write until 9:30 or so. The remarkable facilities crew is raising the hammer throw cage. It’s not hyperbole to say their work is never done. 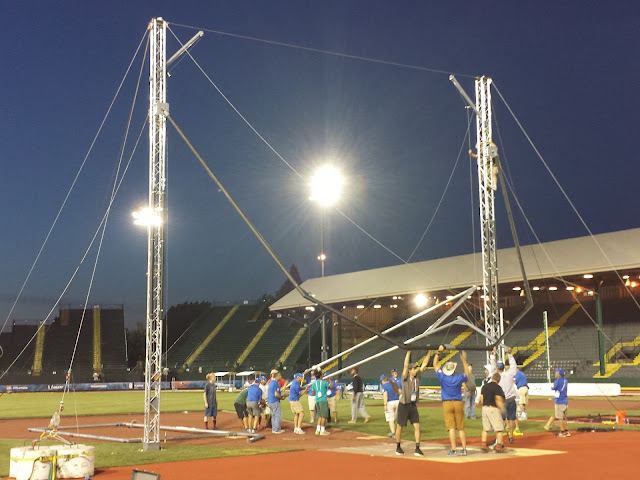 Raising of the Hammer Barn

It’s time for dinner and I head for the Wild Duck. Note that I started and ended my day at the Wild Duck. Can the term ‘ubiquitous’ apply to a single business? It seems as if the Wild Duck is everywhere, even though it’s in one place.

I sit with my RunBlogRun editor and publisher, Larry Eder, who is a connector if ever there was one. I have told his son that my goal is to find a single person in track and field Larry does not know. To my left is the gifted writer, Dave Hunter, from whom I learn more about our craft every time I read his work.

I am introduced to the man across from me and in the enthusiastic noise of the late evening I misunderstand his name. He looks very familiar, but the name I hear does not match my memory. I spend a considerable amount of time thinking I’m speaking with a famous writer. It takes a while, but finally I ask him to repeat his last name.

We’re joined by Bobby Hodge, he of the epic Greater Boston Track Club team of the late ‘70s. Across the street in a motel meeting room I encountered his voluble coach, Billy Squires, the day before the men’s Olympic Trials marathon trials race in 1976. Squires and I hit it off and he coached me by mail; we stayed in touch for a good 15 years. I sought him out in Massachusetts a couple of summers ago, wanting to complete our story.

As I started running in Bill Bowerman’s beginning running class in the fall of ’71, I have long wondered if anyone else has been coached by both.

Virgin peels off, then Hodge - it’s time to bring this 4th to a close. I realize I didn’t see any fireworks this year, but then I remember the women’s 800m.

I did see fireworks after all. 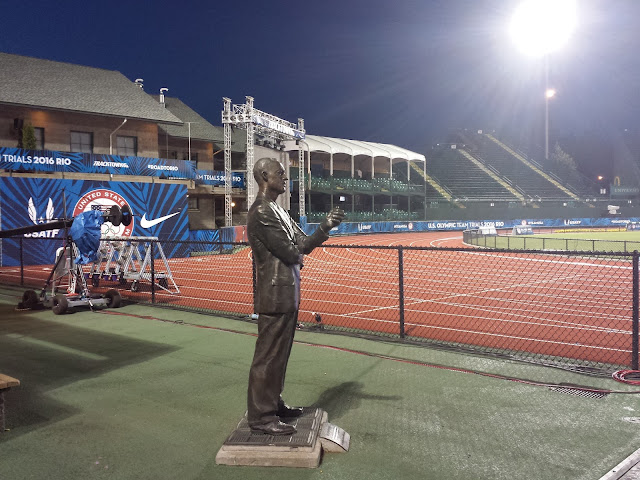 Good Night, Coach.
Thanks for teaching me how to run.