Perfect Night for a Duck

The Oregon Duck began her reign in the rain.

In a stirring display of tenacity and confidence, Francis powered past favorites Allyson Felix (US) and Shaunae Miller-Uibo (Bah) in the final 40 meters to claim her first individual World title.

While that is the slowest winning time in World Championship history, the cool, wet weather kept times slow, distances short, and competition fierce on a night marked by persistent and heavy rainfall.

Francis is Oregon’s first major meet sprint champion since Otis Davis, who won the Olympic 400m in the 1960 Rome Olympics.

Francis was unsure of her position at the finish.

"Me?" she asked when told she had won.

Her mental approach worked to perfection.

Francis "put doubt on the back burner," she said, and the secret to her success is "patience and believing in yourself."

She had both patience and belief in bundles Wednesday night.

Doubt was nowhere to be found.

Before the race she told herself, "You deserve to be there. We're all finalists and whatever happens, happens."

The two runners she swept past are individual Olympic champions, Felix at 200m and Miller-Uibo - she of the famous Rio finish line dive - at 400m.

"They are such phenomenal competitors - I was just telling myself to stay up with them."

Francis' win is the culmination of a well-planned progression through the major championship ranks. She placed 7th in the 400m at the 2015 World Championships in Beijing and 5th at the Rio Olympic Games.

An accomplished relayist, the 25 year old Francis owns 4x400m relay gold from both the 2015 World Relays and the 2016 Olympics.

"It means a lot to me... this is a huge step that is blossoming into something great in the future for my career."

Francis said of her last 40m, "I've got to go back and look at it. I was telling myself to be patient and go with the flow. I told myself 'don't panic, don't freak out, don't get too excited. Put your arms down, put your legs down, and keep going.' "

On winning the World title with a personal best time, Francis said, "It's a good feeling - I'm ecstatic. It's so surreal right now."

Francis has a fan in none other than Allyson Felix. When asked what advice she would give Francis about her career path, Felix said, “I think she’s already doing fabulous.”


photos copyright by and courtesy of Getty Images/IAAF 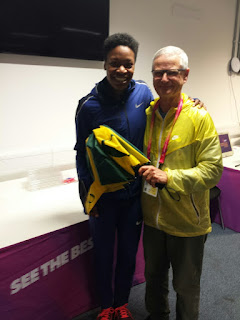 One of these Oregon Ducks just won the 400m World Championship!
Posted by Mark Cullen at 8:07 PM