Copyright 2018. Mark Cullen/Trackerati.com. All Rights Reserved.
Billy Mills, described by Superintendent Bryan Trendell as a "national treasure," gave an inspiring presentation to a rapt audience of engaged students at Coos Bay's Marshfield High School on Tuesday morning. Linda Prefontaine, who organized this event, gave a thoughtful and insightful introduction. Then Billy Mills had the audience spellbound.

"Olympians are chosen by the gods," he said, and "someday you may have wings of an eagle."

He described himself as once having been a "broken soul." Mills, who had lost both of his parents by the time he was 12, found healing in having a dream.

"It's the pursuit of the dream that heals broken souls."

Before his father's untimely death from a stroke, his father assured him, "Magic happens, son."

Mills' positive message was one arrived at through the heartbreak of being a Native American unwelcome in his native land.

"I was not ready for the racism I would find in America," he said.

It was not uncommon for him to be asked to step out of victory photos, for example. For three years in a row of being a cross country All-American, two photos were taken after every race - one with him in, and one with him out.

Mills blended the "virtues and values from my culture" and transformed them into ones which he applied to his marriage and his lifetime goals.

"Pat was the first person to believe in me," he said of his wife. "I took the virtues and values of my Olympic pursuit and turned them into being a better husband and man. These were the things that gave us confidence."

Just as Mills set out on a quest to find what was broken and heal himself, now he passes that experience on to the younger generation.

"What we need to do is come together," he said. "You need to collectively choreograph your future."

He appreciates the platform that he gave himself, and today, at 80, he continues to be passionate about the opportunity to help others.

"Everyday I celebrate my victory when I heal a broken soul."

After his stirring speech, students formed a long queue to greet him, he met with the student leadership class, and students who wanted to engage with him for just a moment stopped him on his way to the car.

Every time he met a student he asked, "Do you read?" He encouraged civic engagement and good citizenship every step of the way.

A magnificent day with Mills became even richer with the showing of "Running Brave" at the Egyptian Theater, which was followed by a question and answer session with the public.

Mills concluded the evening with unifying comments about the divisiveness that pervades our country.

"But there is fear," he continued. "Fear in America. We have to overcome that fear with knowledge, and our young people play a major, major role by learning, by coming together."

"We have to have the strength and the courage - collectively - through our tax system - to reach into the poverty pockets of America and give opportunity.

"Never in the history of our existence as a country has the need for tribal, state, and federal governments - along with our marketplace - to come together and collectively choreograph the horizon of our future been greater.

"It starts with our young people."


Personal Notes
Before the evening presentation, we took advantage of some great photo opportunities at the Prefontaine murals in downtown Coos Bay. Below you'll see Billy Mills and Linda Prefontaine in one; Billy Mills and yours truly in the other.

Thanks to Linda Prefontaine for putting together Billy Mills' memorable visit. It was an excellent learning experience for all the students and runners Mills reached out to and connected with.

Thanks to all who came, and thanks, too, to Linda for her invitation for me to introduce Mills, and for her warm and kind introduction of me last evening. 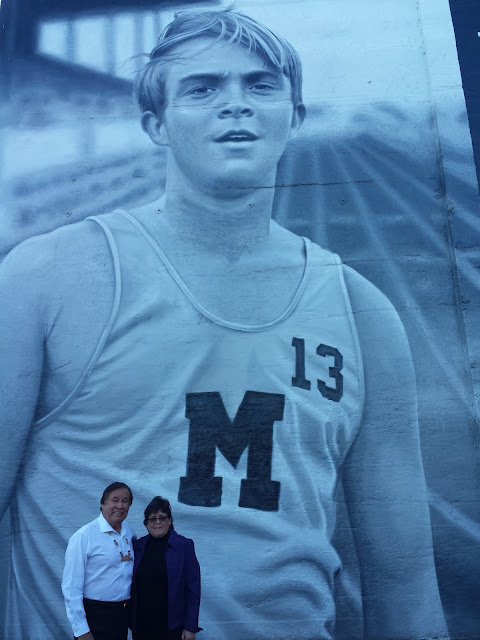 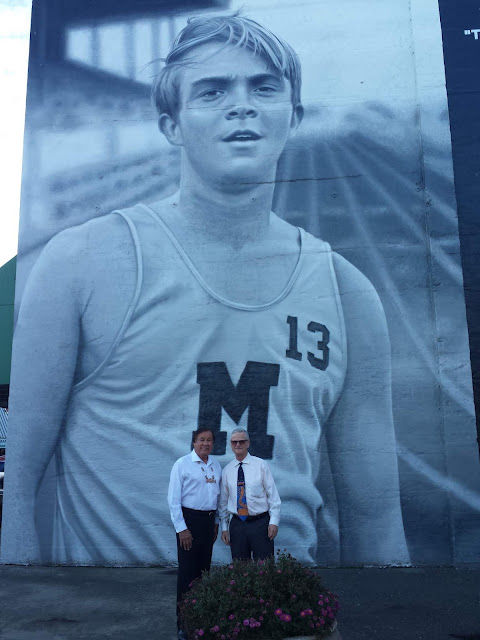 Every Olympics has an image – a snapshot – a moment seared in our minds forever that one iconic moment that captures the spirit of that quadrennium’s games.

The 1964 Tokyo Olympics were a games of the expected, yet for all the outstanding accomplishments of favorites like Bob Hayes, Al Oerter, Wyomia Tyus, and Edith McGuire, the lasting image of the ’64 Olympics is none of these.

As you know from the film you just saw, Billy Mills was born and raised on the Pine Ridge Indian Reservation in South Dakota. Although Pine Ridge is very rich in culture and spirit, it has long been recognized as one of the poorest communities in America with unemployment often reaching 80%.

Yet it was here that a future Olympic Champion, Olympic record holder, and world record holder took his first steps towards greatness.

In spite of the absence of major championships on his resume, he had trained with a focus and determination since he was 12 with only one goal in mind: an Olympic gold medal.

He arrived in Tokyo well ‘under the radar screen,’ and the world was about to see the greatest upset in Olympic history unfold.

I’ve long thought Mills’ stunning victory was best summarized by the reporter who came up to him afterwards and asked: “Who are you?”

To give our many runners in the audience some context of the nature of his triumph that day, suffice it to know that he set a personal record by nearly 2 seconds per lap for the 25 lap race.

While most discussions of Mr. Mills’ running achievements seem to end with , it’s important to note that the following year, while winning our national championships with a dramatic lean at the tape over his Tokyo roommate, Gerry Lindgren, he set a world record for six miles of 27:11.6.

Today, Mr. Mills is an accomplished businessman, author, and national spokesperson for Running Strong for American Indian Youth, a division of Christian Relief Services. In this role, he has helped raise millions of dollars in cash and in-kind gifts for charities worldwide, and now has launched and supported the Dreamstarter program for Native American youth.

He has received five honorary doctorates, is a member of six Halls of Fame, and the Distinguished Service Citation of the University of Kansas Alumni Association cites his outstanding achievement for the betterment of humankind.

Just days ago – in fact hours before the 54th anniversary of his stirring triumph - he was inducted into the inaugural class of the National Native American Hall of Fame.

And to top it all off, in 2012, he was awarded the Presidential Citizen’s Medal by President Obama.

Greatness, in Mr. Mills’ case, is a lifelong experience.

Tonight, we have the great privilege of meeting with Billy Mills, and in no less a place than Coos Bay, OR, where someone else was also known for running brave.

Thank you, Linda Prefontaine, for making this opportunity happen.

Those of you who were at the high school this morning saw the video of the finish of Mr. Mills’ Tokyo 10,000m race, and tonight we’ve seen the recreation of one of the most iconic last laps in distance running history.

Many of you have noted that he finished in lane 4… In spite of what almost every coach will tell you about finishing in lane 1, some rules are made to be broken!

In both videos we’ve seen 1964’s iconic image, the smile that would not end – a testament to what happens when you are Running Brave, Running Strong,
and running with unfettered joy.