by Mark Cullen
with Joe Head

As young Joe Head toed the line of the 1968 US Olympic Trials Marathon, he said to himself, "I am in the presence of greatness." Near him was Billy Mills, who four years earlier had inspired him to run.

1968 was a landmark year in young Head's life. After running the Trials race in Alamosa, Colorado, he flew to Reno to join his parents on vacation.

In the Reno airport he saw a flier for a track and field meet at the US Olympic High Altitude Training Camp (elevation 7,382ft/2,250m), and Head asked his host to drop him off at Echo Summit for the day.

With his camera he created this unique record of a
remarkable place and time.

Head is releasing these photos on December 1, 2018, in honor of and in conjunction with the celebration of the 1968 US Men's Olympic Team at the USATF convention in Columbus, Ohio.

This is the first widespread distribution of his archive, and trackerati could not be more honored than to be entrusted with bringing Head's collection to light.

More on Head below; scroll down to see the slides and then read the story of how Head came to create
this record of an such an important slice of US track and field history.

Joe Head's comments are in italics.

(Hint: if you have a touch screen device, it helps, at times, to expand the picture.) 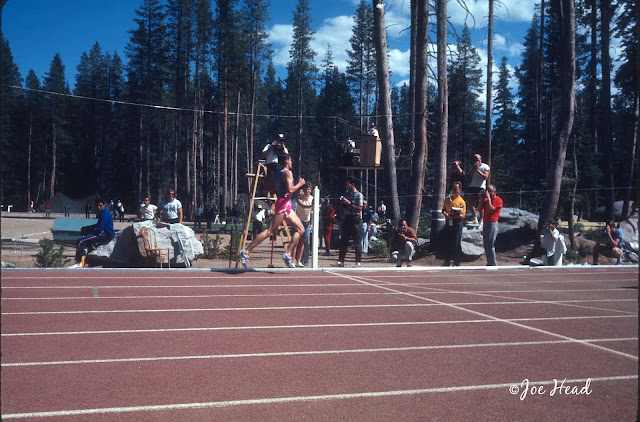 Head: I originally took this Ektachrome slide of Jim Ryun the day I visited the South Lake Tahoe Echo Summit Olympic Track and Field site back in late August 1968. 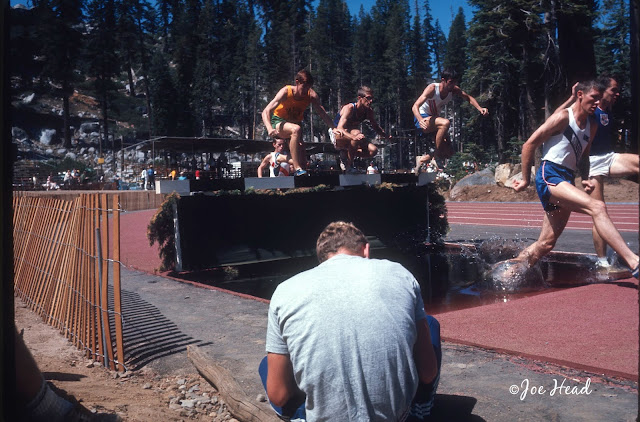 Bob Price, Smith's roommate at Echo Summit,
is at the top of the water jump directly above
Tracy Smith's head. 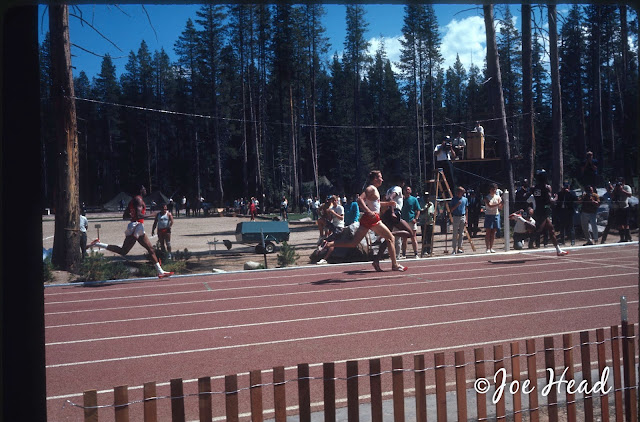 This is the only known photograph
of Winzenreid's World Junior Record.

When this was first posted on Facebook,
Winzenreid said that it was the first time he had seen a photo of the race.

Note that Evans is setting foot on the finish line.
James is in the white shirt
just to the inside of Winzenreid in red. 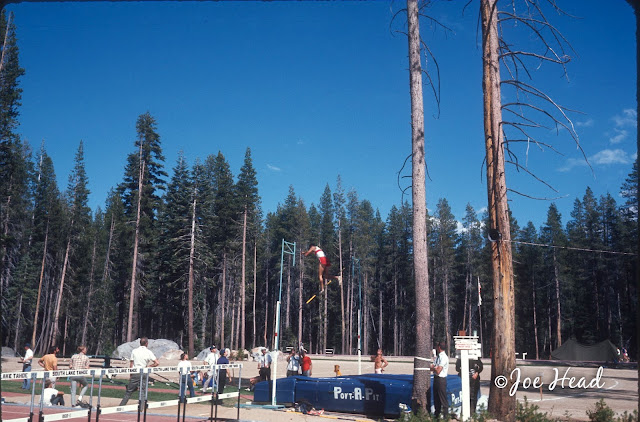 At the 2014 Echo Summit dedication,
Tommie Smith said of pole vaulter
Bob Seagren clearing the bar
during practice in the forest,
"I thought he had fallen out of a tree!" 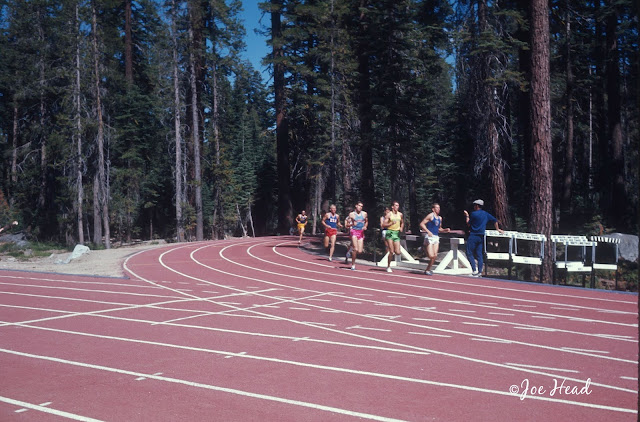 Just behind Divine and leaning on the
steeplechase barrier is Tom Von Ruden.

Said Mason, "I remember Jack yelling out times
to me, Divine, and Ryun."

According to Kenny Moore's book,
"The Men of Oregon,"
University of Oregon track coach
Bill Bowerman was responsible
for siting this track at almost exactly the same altitude as Mexico City. 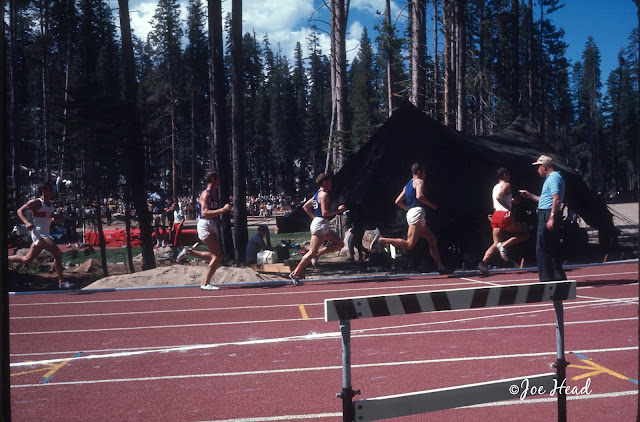 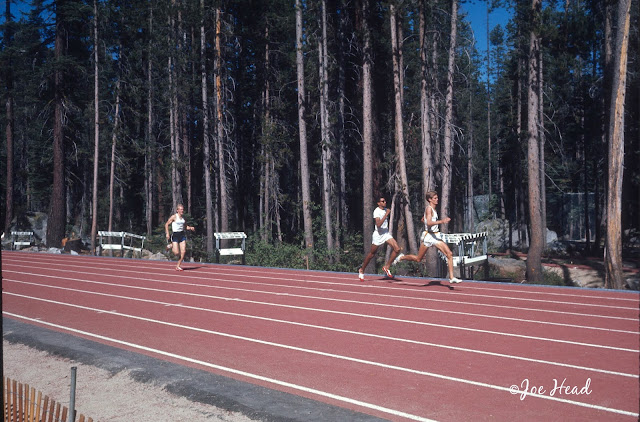 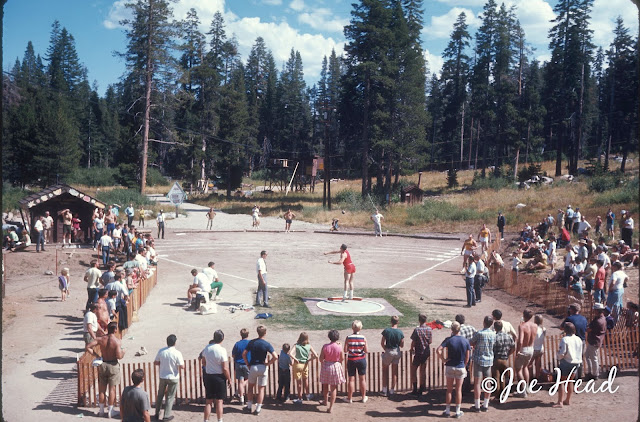 We agree with Track and Field News Editor
Garry Hill that the shot putter is "almost certainly"
Randy Matson. 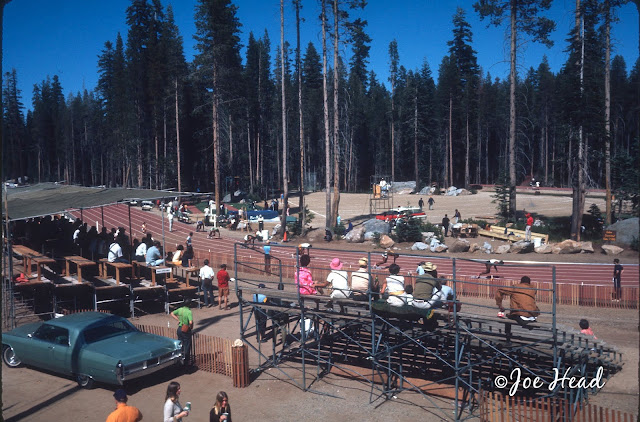 In this race Vince Matthews ran a world best 44.4,
but the time was not approved as a world record
as he set it wearing
the infamous Puma brush spikes. 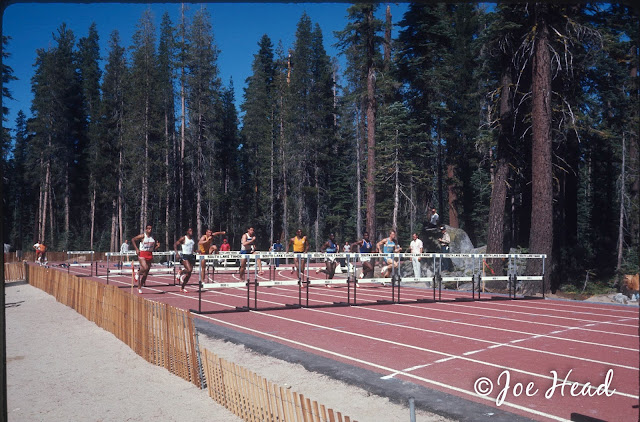 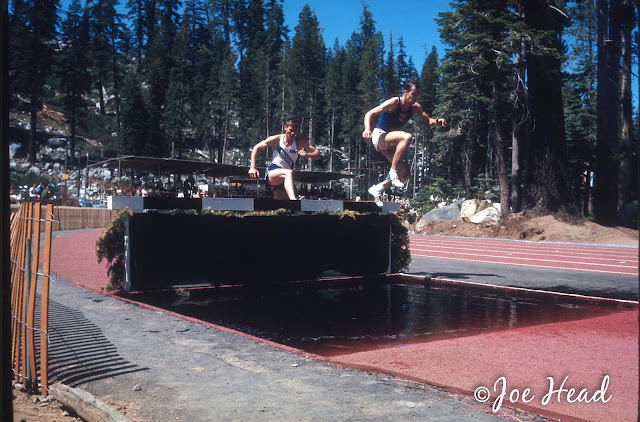 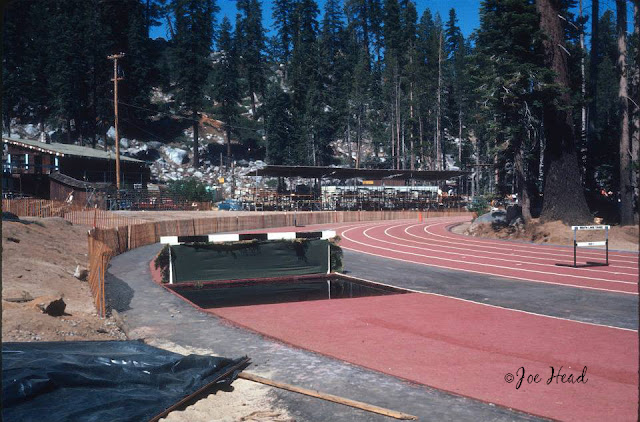 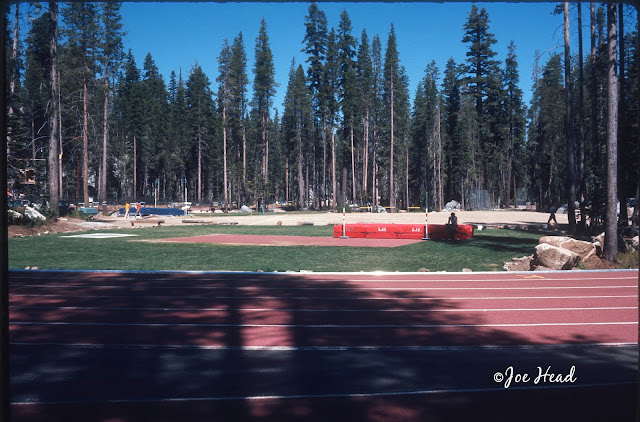 In the background are the
Discus, Javelin and Hammer Throw areas. 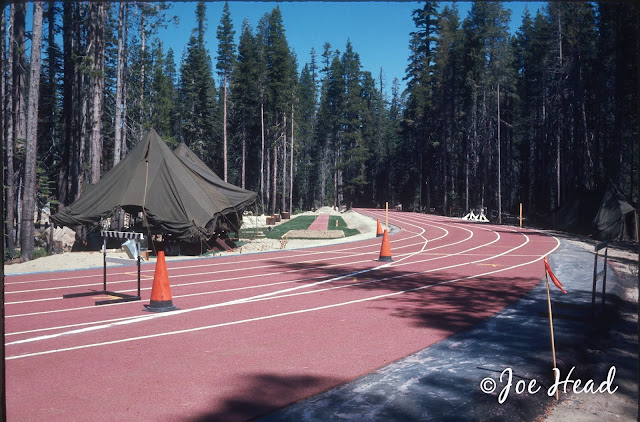 Back stretch of the Echo Summit Tartan track.
Long Jump runway and trainer's tent can be seen at the edge of the infield. 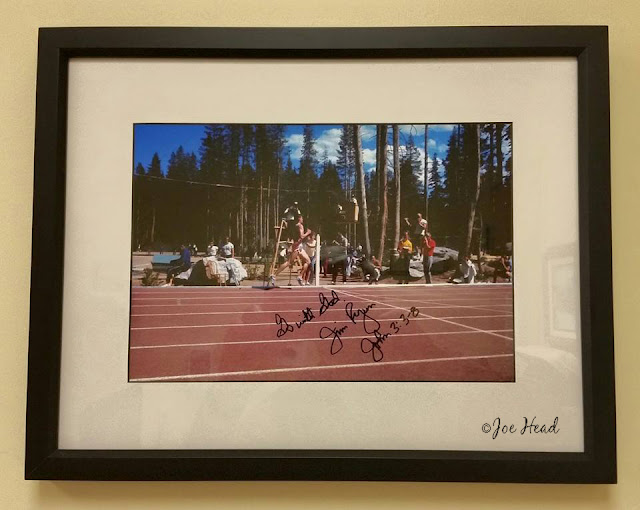 Years later I would get to meet Jim and his family at the Cooper Clinic in Dallas, TX where I was working at the time. He graciously autographed this enlargement of the original shot for me. 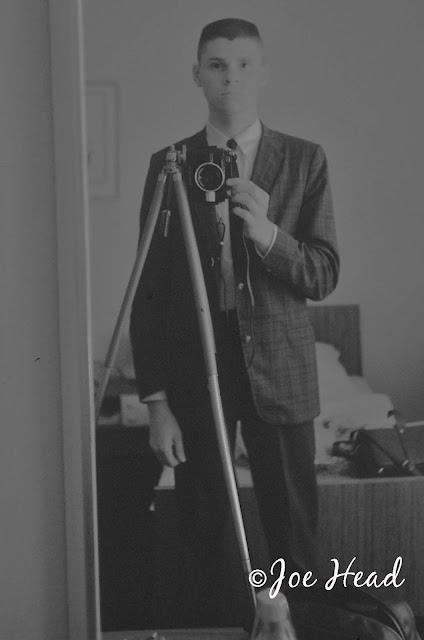 Joe Head with the camera
he used at Echo Summit.
It is a Nikon Nikonos 35mm,
Nikon's original underwater camera.
Jacques Cousteau assisted in its design.

Head used Ektachrome slide film (ASA 64),
and took all of the Echo Summit images
using the tripod pictured above.
He estimates that the shutter speed was 1/250th of a second.

Head stored his historic slides in what were once ubiquitous yellow slide boxes for 30 years. He transferred them to plastic archival sheets,
and they were stored at room temperature along with his other photos and slides.
He then had them digitized.

Along the way, in 1997, they survived in a downstairs closet the rupture of a water pipe upstairs.

Head still has the originals and - archivist and historian to the core -
he recorded race information on the white band of each slide.

These are the first known color images of the August 31, 1968
Echo Summit meet to have emerged.

Photo taken in a Berlin, West Germany,
hotel room in 1967.

Joe Head sees himself as an unlikely runner. He says he was a 'chubby, nonathletic kid' who was inspired to run by Billy Mills as well as by a teacher who read a story about a Boston Marathon runner who became a World War II courier.

Head's interest in physiology led to his current career as a physician assistant. His arrival at Penn State was "serendipitous," he says.

"My freshman year (1966) was the same year that Penn State's human performance lab - Noll Laboratory - became involved in cooperative high altitude studies" with several other universities. Head is something of a hero in Penn State alumni circles, as multiple articles about the 50th anniversary of the Olympic Trials marathon on their website attest.

Before becoming a physician assistant, Head  completed a masters degree in exercise physiology while working as a "treadmill tech" in the practice of none other than Dr. Kenneth Cooper - of Aerobics fame - where Head tested many of the world's greatest athletes, including Jim Ryun, who signed the photo (above) many years after Head took it at Echo Summit.

Head finds it remarkable that he was able to enter the 1968 Olympic Trials marathon at all. He and Bill Lamb drove from Cimarron, New Mexico, where Head had a summer job as Program Counselor for the Philmont Scout Ranch, to Alamosa, Colorado, site of the Trials marathon, the day before the race. They did so thinking they could register on the day of the race, as that was the information Track and Field News had published in the April magazine.

But they encountered race co-director Joe Vigil, who would have none of a late entry. Head and Lamb, quite discouraged, spent the night in a dormitory lounge, and tried again the next morning. This time they encountered US distance legend Buddy Edelen - first US under 30:00, first under 2:20, and marathon world record holder - who welcomed the pair with open arms. Still, chastened by the previous day's experience, they really didn't believe they were in the race until the gun went off and they were running. Later they learned that another runner was attempting to enter late as well - some guy named Shorter.

Head says he went out too fast, and during the 3rd of
5, 5.2 mile loops, he began walking. He got his stride back and completed the race, quite an accomplishment at altitude (7543'/2299m), and this on a day when men named Mills, Burfoot, Shorter, and Higdon comprised one of the most impressive DNF (did not finish) lists in US history, with two Olympic gold medalists (one past - Mills, and one future - Shorter) among them.

Head grew up in Gouverneur, New York, and now lives in North Carolina with his wife and daughter. Who is Head in his community, the man who for so long was a keeper of the Echo Summit flame? When word broke this past October that it was National Physician Assistant Week, Facebook lit up, cakes appeared, and tributes flowed from loyal, grateful clients.

"The best PAs in McDowell County... proud of you... awesome... blessed to have them both... thank you for all you do for this community."

We are posting this knowing that it is a work in progress. If you have information relevant to these photos - most especially if you can identify one or more of the athletes not yet identified - please contact Joe Head and Mark Cullen (please copy us both):

Personal note: It's been my great personal privilege and pleasure to have worked on this project for the last several months with Joe Head. I'm very grateful for this opportunity and look forward to our continued association as we unravel the mysteries of the identities of all of the athletes in his treasured images.

Joe and I would like to thank Chris Allison for his kind assistance with placing watermarks on the photos.

Thanks, too, to Mike Fanelli, for extricating the results of this meet from his famous Track and Field Garage and sending them to us. Solid.

Highly recommended reading
Bob Burns' Track in the Forest is the definitive work on the 1968 Echo Summit High Altitude Training Camp. Burns does an outstanding job of placing the Echo Summit experience into the broader cultural and political context of a turbulent time. Available from the Chicago Review Press and on Amazon.
https://www.chicagoreviewpress.com/track-in-the-forest--the-products-9780897339377.php

Photos may be reproduced only with the express written consent of Joe Head.