Note: this website was down for several weeks and I sincerely apologize for that. Thank you, loyal readers, for returning to the fold! Special thanks to Jake Willard for assuring the joyous reunion of Trackerati's content with its domain name.

I am resuming with an article I posted on Facebook during the Prefontaine Classic: 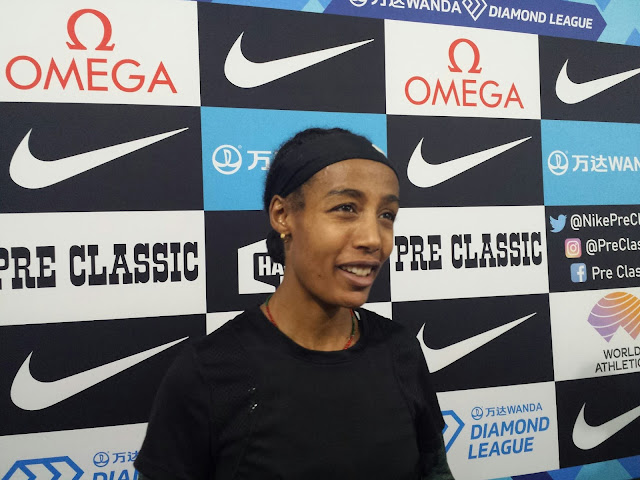 During the Olympic Games, many worried that multiple event athletes like Sifan Hassan or Katie Ledecky might 'explode' from all the racing - that there might be a physical or mental breaking pointhile that, quite fortunately, hasn't happened, late last evening Sifan Hassan acknowledged feeling fatigue in her legs as early as the 3rd lap of her 5,000m world record quest at the Prefontaine Classic. This after her double gold with a frosting of bronze at the Olympic Games in Tokyo.

"I'm not fresh," she acknowledged.

"It was actually physically the hardest. I was so tired and I had to push to the limit."

She then said, quite cheerfully, that she'll be racing in the Diamond League soon. When one reporter suggested that being only 5 seconds off her PB and recording a seasonal best was, when all is said and done, not a half-bad result, Hassan offered perhaps unexpected perspective by saying, "I'm really happy! I was so tired ... I'm proud of today and I push myself, and I think Tokyo made me stronger." She was, indeed, quite pleased that she finished the race.

While the pace lights eventually became irrelevant to this race, she likes them nonetheless.

"If I don't feel OK, I can do without lights. It's good, actually, to have it," she said, but she did not feel discouraged when the pace lights got ahead of her.

Of the enthusiastic and supportive Hayward Field crowd, Hassan said, "I'm so happy to see them... because I have so many fans everywhere," and she looks forward to her return to Hayward in 2022.

On a night when a world record attempt was the focus of the meet, Hassan gently reminded us that there was much to celebrate in a 14:27.89.

Meanwhile, Francine Niyonsaba took the measure of a star-studded world class field in the 2 mile, as her 9:00.75 left 5k and 10k world record holder Letesenbet Gidey and two-time world 5k champion Hellen Obiri in her wake.

New Zealand’s Geordie Beamish found himself a surprise winner of the International Mile in a stellar 3:54.86, while Craig Engels revealed a fundamental misunderstanding of the relationship of athletes to Hayward Field fans: Dude, they wave at you.