While the track and field world was celebrating the career of German discus great Robert Harting, a terrific meet broke out in Berlin’s Olympic Stadium.

The ISTAF event is part of IAAF’s second tier of meets (and the first one covered by this website).

Don’t let the ‘second tier’ part fool you – some of the sport’s greatest stars perform at these meets.

“For my season I thank God,” said the humble and soft-spoken Cheruiyot in an interview with Trackerati. “I am honored tonight because I close my season well here in Berlin.”

“This is the last race for me,” he said with evident relief that he had finished so well and now has an opportunity to rest. “I am going back to build up for next year, but I am all done for this year.”

German Aleixo-Platini Menga, 31, suffered the ignominy of finishing behind a 42 year old man in front of the hometown crowd. He was unavailable for comment as he was rushed from the stadium to begin the rest of his life in exile in an undisclosed location.

Dramatic in a different way was the women’s 100m. Marie-Josee Ta Lou (CIV) turned the tables on Michelle-Lee Ayhe (TTO), who had won the Diamond League final in Zurich just three nights earlier; Ta Lou finished a surprising 3rd there. The times in Berlin were a modest 11.08-11.13.

Orlando Ortega (Por) won the men’s hurdles in an outstanding 13.15, while Christina Manning (US) won a squeaker over Germany’s Pamela Dutkiewicz, 12.72-12.73. Olympic gold and silver medalist Dawn Harper-Nelson (US) continued her farewell tour and finished 5th in 12.94.

There has been a lot of online comment about Colleen Quigley’s magnificent 3000m steeplechase time of 9:10.27, which makes her the 3rd fastest performer in US history behind Courtney Frerichs (9:00.85) and Emma Coburn (9:02.58).

Far more impressive than the outstanding time was her win, a stirring competitive dusting of Kenya’s Daisy Jepkemei as Quigley fought off her repeated challenges. Jepkemei finished 2nd in 9:14.66.

Germany closed out the women’s track events by winning the 4x100m relay, much to the impassioned delight of the hometown crowd. Kimberly Williams of Jamaica won the triple jump in 14.40 (47-3), while Belarus’ rising high jump star, the surprise European silver medalist, 20 year old Maksim Nedaskeau, won at 2.30 (7-6 ½). Apparently he likes to jump in this stadium, as it has now yielded him silver and gold.

Germany fared well in the throwing events, with European champions Christina Schwanitz (2014 + 2016, shot put) and Christin Hussong (2018, javelin) 1st and 2nd in their respective events. The men’s javelin yielded the usual spectacular results for Germany as Thomas Rohler, Julian Weber, and Andreas Hofmann swept the podium, with Rohler’s 86.50 (283-9) the winner.

As for the men’s discus final, take this result and paste it on your wall. You’ll never see Robert Harting’s name in a discus final again.

Props to meet organizers, who tweaked the schedule in such a way that the men’s discus would finish last, and for assuring that Harting, no matter his standing, would have the last throw.

"I am especially grateful about the people who let me be the person I really am," said the ever-gracious discus king. "I am really proud that everything worked out pretty well."

Meanwhile, Kim Collins announced that he, too, would retire after this meet. 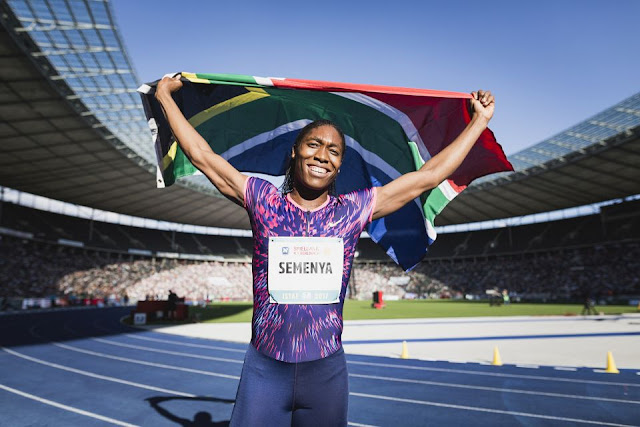 photo credit: Gallery4/ISTAF
Posted by Mark Cullen at 8:43 AM