Opening Ceremonies at the Catete Grill

The Catete district is a middle class neighborhood southeast of downtown Rio de Janeiro and north of the famous beach areas of Copacabana and Ipanema. It will be my home for the next two weeks. It seems a much more realistic view of Brazilian life than the one I had near the beach during my first week here – or is it?

I had attended Opening Ceremonies in Montreal in '76, and as much as I would have liked to be in Maracana Stadium on Friday night, I found myself with a question I could begin to answer only outside the stadium.

How deeply do these Olympic Games reach into the lives of everyday Brazilians?

During Opening Ceremonies, I visited five local restaurants/cafes/bars/hangouts in Catete, most of them a combination of all four. I wondered: with room for 80,000 in the stadium, what was this experience like for the 7,000,000 Cariocas (natives of Rio) who did not get to attend?

Opening Ceremonies began at 8:00 pm local time. I started at the Deca Bar and Cafe at 7:55, and already the place was crowded. This is not a challenge for a space perhaps 7m across and 30m long, but everyone was frozen in the position of the evening: seated, facing in one direction, and looking up.

I moved along to a neighborhood landmark, the Catete Grill. It’s opposite of the Deca - a vast space with the buffet of a lifetime (pay-by-weight buffets are very common in Brazil), seating for well over a hundred, and numerous huge flat screen TVs.

As the ceremonies began with an airplane flying towards the stadium, everyone turned and toasted each other.

This night, people were dining and staying.

One woman in particular caught my attention. She (right, with her daughter) sat riveted and unmoving - but clearly not unmoved - for four hours. 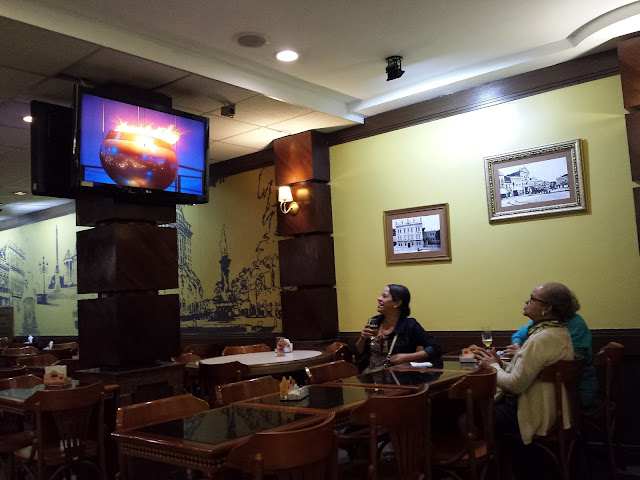 As I contemplated her age and her rapt attention, I wondered what her life has been like, lived under a military dictatorship for 21 of her years.

A poignant scene, too, as a young man staffing the buffet line stopped in front of a screen to watch the proceedings. That he had to work during Opening Ceremonies broke my heart and likely his. He kept one eye on the food and the other on the screen.

I saw him repeat this move numerous times during the evening, the events on the screen clearly so much more compelling than yet another night working the line. What does his future offer him? I estimate that he is 21, which means he’s been anticipating this event for 1/3 of his life. Numerous young staffers lingered whenever they could to catch a glimpse of their moment of untold pride.

Three times, young adult men came in with their mothers on their arms. The treat was Opening Ceremonies at the Catete Grill and each mother was beaming. (Those were their mothers, weren’t they?!)

I left at 10:00 to visit other gathering places and found much the same: people glued, a younger crowd, perhaps, at the watering holes a block or two north, but the same rapt we’re-not-leaving-this-until-it’s-over attention.

I’d become attached to the scene at the Catete Grill and returned at 10:30. Countries beginning with S were marching in; anticipation was building to the proverbial fever pitch. 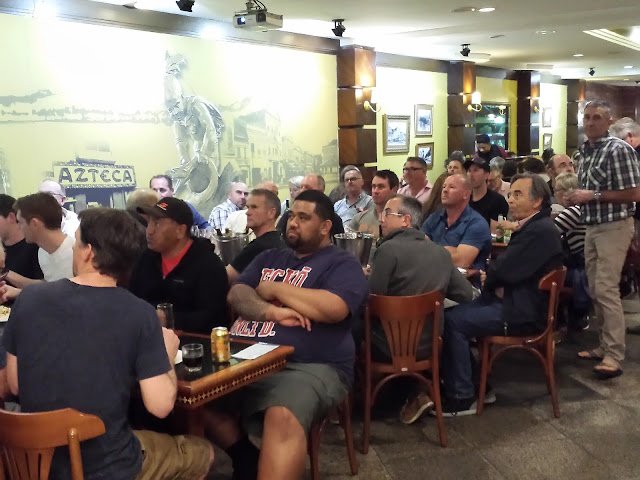 Zambia was announced, and a woman clapped and shouted what everyone knew: “Braaaaziiiiilll!!!!!” was up soon.

A glimpse of the flag at the head of the Brazilian team.

And did so again when the flame was lighted, though there was palpable disappointment that it was not Pele.

There was one particularly memorable moment at the Catete Grill, one which will bring a rueful smile every time I think of it and of the place of the US in the world.

During the environmental segment, the issue of rising seawaters was raised, and a number of places were shown with projected levels of future inundation. Each location got a murmur of knowing commentary from the patrons of the Catete Grill.

Then Florida appeared, half submerged.

Apart from the entry of Brazil and the lighting of the flame, I’ve never heard such clapping and cheering.

This Catete crowd was deeply connected - to all the events on the screen.