It's rare in a regional championship that the top 3 in the world in one event come together to decide who is best.

It's rarer still that all three should be from the same country.

That the championship is held in their home country.

The hoped-for German men's javelin sweep did not materialize at Berlin's Olympic Stadium Thursday night, but their national team finished a still remarkable 1-2-5.


The places were decided early. On a hot and humid night replete with swirling wind and heavy air, the expected 90m+ fest did not materialize.

Estonia's Kirt Magnus broke up the sweep with his first round 85.96 (282-0), which kept him entrenched in the 3rd podium position, while Poland's Marcin Krukowski picked a good time to record a season's best as his 3rd round 84.55 (277-4) stood up for fourth.

The top four were decided in the first three rounds as throwing conditions deteriorated. 2017 World Champ Johannes Vetter (Ger) mustered 83.27 (273-2) in the 5th and simply could not get unwound.

Rohler was the only one who had a successful strategy for handling the wind. In separate individual interviews with Trackerati, Rohler and Hofmann revealed the subtle difference between gold and silver.

"The wind was difficult," said Rohler, "but we expected that - or I expected that - and I had a game plan for today: just throw precise, no power, nothing. Just do what you can do as precise as you can. All the throws showed it was possible, but it was really tough to make them sail."

As he said "precise", Rohler pinched his thumb and forefinger together, raised his arm, and pointed to the sky to exactly the point he was aiming for.

The changing nature of the wind was a factor, too.

"The wind was level, I guess, because people from tribunes told me it was a headwind, we just felt a strong tailwind - I think we just felt it at different levels."

Runnerup Hofmann, who had taken the lead in the 2nd round at 87.60 (287-5) said, "Sometimes it was from the back and sometimes from the side and after the second throw I don't know. I hit the point - I hit the javelin very good the first few meters, but then when the javelin got its height it came down very, very early - too early.

"But it was not a technical thing - the throw was very good but I don't know what happened in the air. Some dealed with it better than me. It was a struggle, and you see it was two meters further," he said ruefully of Rohler's winner.

When asked if he has a favorite stadium to throw in, Hofmann laughed and said, "This year in Offenburg again I threw my personal best of 92 (.06) meters - last year it was 88.79. The conditions were perfect in that moment. It was easier to throw with a tailwind."

When asked if it would be helpful to have a directional wind gauge for the javelin, Hofmann said that one on the ground would only be a beginning.

"You throw 30, 40 meters higher - you have to have a wind gauge there or flags or something like that. Sometimes you see it (wind) in the stadium," said the always shrewd Hofmann. "On the roof you see some flags and then you can deal with it - how the wind goes 10-12 meters faster."

How to use this information?

"Before the competition you can deal with the struggle of how you want to throw."

As if to put a fine point on it, as soon as the last event ended, a torrential rainfall began that was reminiscent of the one that brought competition to a halt in the 2005 Helsinki World Championships.

In a remarkably precocious field, five throwers came in with bests over 89.02 (292-1), with the German trio at a remarkable 91.78 (301-1) and above. It would not be fair to say that the wind won; everyone encountered unique conditions due to the weather.

It was Rohler who figured out best how to handle the wind, and his precision won the day. 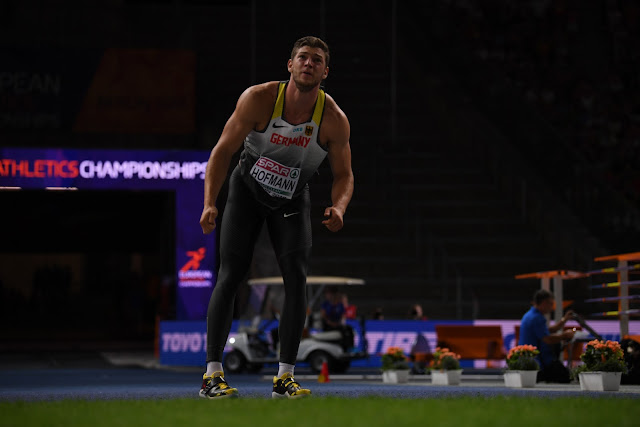