Startled because we expected a graduate assistant to be teaching Bowerman’s  famous beginning jogging class.

It's not every day that your beginning running teacher was selected Head Coach of the US Olympic Track and Field team just the week before.

Or that he ignited a running boom in his country.

Or that he transformed shoe technology and design.

Or that he co-founded a small sporting goods company (it was more than running shoes almost from the start).

Or that he was a key fund-raiser for rebuilding Hayward Field’s West Grandstand. Yes, we have been down this road before.

Without Bill Bowerman, we are not all gathered here today from around the world.

All men, as women's sports were then at the club level, if at all.

On that first afternoon of what would prove to be a lifetime in track and field, what did I do before class?

Went downtown to The Athletic Department and bought a pair of shoes. I would not have wanted to be underprepared for class – for Bill Bowerman’s least of all.

When I was finished with those shoes months later, I put them in my sister’s green Army duffel bag – the first I placed there, but by no means the last. 28 pairs of shoes and over 270 pieces of memorabilia later, I had what most call a collection, though ‘archive’ is more accurate. The archive of a college kid who was fascinated by wondrous things transpiring around him and kept a record of it all.

I was drawn to this class by my early interest in all things track and field, most notably the Olympic stars of 1964 and 1968. While I came to track and field from the dark side - that would be soccer - I had always liked to run, and six years of soccer provided me with a solid base.

Bowerman cared deeply about each and every one of his runners, and what he said mattered. He would greet us on campus, review race results, and make us beginners feel part of an Oregon track and field heritage and family. For years after I graduated in 1975, I would make the pilgrimage across the track to the Bowermans' seats in the East Grandstand at the end of a meet. He didn't always remember our names, but he remembered us.

"How are you?" he would ask earnestly and the update was on.

One benefit of being in Bowerman's class was people's general reluctance to take him on about administrative details.

He knew them well enough, thank you; his abilities as an administrator don't always get the attention or full credit they deserve. Bowerman was vocal and influential; his Olympic team head coaching gig was not the least of it.

Bowerman did not suffer fools lightly, and he took on sports entities like the NCAA and AAU and their sometimes arcane and archaic rules. Steve Prefontaine got more attention for doing the same, but it’s clear who set the example.

I started running in Bowerman's class just three years after Tommie Smith and John Carlos raised their fists in eloquent protest in Mexico City. In 1968, the United States established a high altitude training camp at Echo Summit, CA, where Olympic Trials were held as well.

When asked the question of who led a place that has left an enduring impact on US Civil Rights history, almost to a person contemporaries in age guess that it must have been a leading honcho of the AAU or the US Olympic Committee.

Nope. Bill Bowerman was in charge, and in fact, it was Bowerman who chose Echo Summit from among four candidate locations. He helped US track and field to navigate the churning waters of what was in many ways one of the most devastating years in US history.

Having a teacher with this much clout served his class members well, especially when we came, most reluctantly, to the end of the fall quarter.

"Just register under varsity track and I'll sign for it," Bowerman said, while trying to contain his delight that so many of us wanted to continue running.

This is how I came to have varsity track in my University of Oregon transcript - a status not well-supported by my beginner's times.

The tunnel Bowerman came through is replaced by tonier digs now, but that spot  is only 50 meters from where I’m now sitting in the press tribune, having realized in 2013 when I started my first website that the choice I made when I was 19 between journalism and history as majors need never have been a choice.

“I need to answer that carefully,” I always reply.

“I began running in his class.”

And he’d be proud of that. 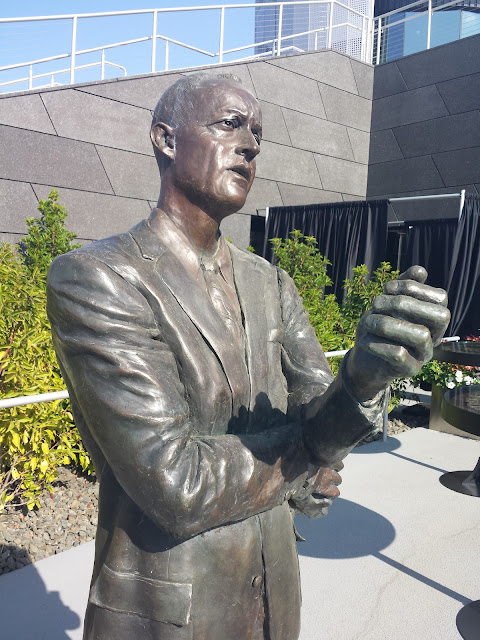