Looks like North America is dominating the downhill again.

There has never, ever been a hammer throw performance like this for the United States.

All three men made the final.

All three women made the final.

In World Championships history, never had more than two men and women combined made their finals. Today’s performance shattered that record by 4.

Not so fast I hear you say, and you’re right: the recent US history has been of throwing well in qualifying, getting tight in the finals, and not executing to pre-meet potential.

And yes, Daniel Haugh in 2nd is surrounded in 1st and 3rd by the defending World and Olympic champions from Poland. Duly noted.

Nonetheless, the US throwers are performing as a team in a way that has been unheard of until now.

But it’s not a team competition, I hear you say.

Right again. Yet the opportunity for changing the face of an event lies in the hands of these six.

(At the conclusion of this post are quotes from Janee Kassanavoid and Daniel Haugh.)

Meanwhile, the qualifying rounds of the men’s 100m showed once again that while we are welcoming the world… well, not everyone who cannot get a visa for this meet would agree.

In rather dramatic fashion – would lane 3 of the 100m be occupied or not? – Kenya’s Ferdinand Omanyala did indeed fill lane 3 after a tense week that saw him landing in Eugene only a few short hours before his race. He advanced to the semi-finals and has less than a day to prepare.

Via Track and Field News, the BBC’s article on marathoner Chris Thompson depicts the human cost of this situation: https://www.telegraph.co.uk/athletics/2022/07/15/chris-thompson-absolutely-devastated-visa-farce-ruins-world/

One of the more engaging aspects of World Championships is often the 100m preliminary round in which single athletes are entered as the only representatives of their countries - in the entire meet.

But the saddest sight of all on this first day was seeing Fiji’s Ratu Benuve Tabakaucord walk away from his blocks, disconsolate at having false started. And the margin by which he missed a fair start?

That will be one long plane ride home.

Meanwhile, all of you who picked the Dominican Republic to win the 4x400m mixed relay with the Dutch 2nd and US 3rd, well, step right up – there’s room on the pickers’ podium for you!

Of the many statistics provided us by World Athletics about Allyson Felix’s stellar career, this one struck me the most: she won World medals over a span of 17 years. 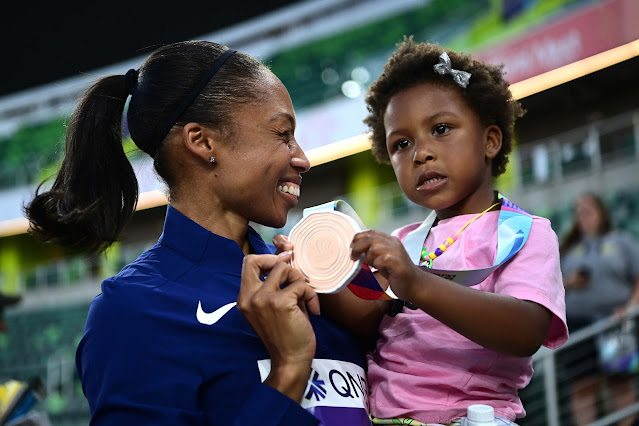 If you think this photo needs a caption,
you just haven't been paying attention.
Photo credit: Getty Images for World Athletics

If you have the right intensity, you’ll produce a large throw. You have to have a good plan and execute it. If you execute a bad plan, it’s not going to turn out well.

I really wanted to open up with the standard and go home. I think it ended up working well… at the end of the day I got 5 throws up there: 2 warmups and 3 competitions, so it’s 5 throws now in the circle and now I’ve got my physical and my visual Q points and I feel comfortable and ready to put some big throws tomorrow in the final.

I look up to him, he has beautiful technique, and he was a guy - in high school I’d bring my lunch into the library and I’d watch him throw on You Tube. He’s a guy I’ve always looked up to and studied his technique. I’d love to meet him one day.

I’m in personal best shape – training has indicated that… I’d love to open up right in that 77-80 meter range and then just build it and keep improving like I did today. If I can leave here with a personal best it’s hard to be upset. Just want to execute and get a throw I’m proud of.

The field is absolutely stacked. There are some big guys and they’re older, they’re veterans. I kind of like the baby in this!

I need to focus on me, on my throw, and I believe I’ll be on the podium.

In her comments today, Kassanavoid echoed what she said at US Nationals: that she needs to pause and focus and take a deep breath.

I am ready to go, just had to take a deep breath when I got in. Then I just did what I have been doing every day. Got the Q with the first round and now ready for the next one. I think the hammer throw is open no matter who is number one or the last person to make it to the meet.

I know that I am capable of making great things, PR, WR and things like that. So it is about who wants it the most. My personal coach is here and I got couple of my friends coming here to support me.

I love my journey.