Sonia O’Sullivan’s 1500m race at the 1993 Stuttgart World Championships remains one of my favorite races I've seen in person.

In a brief window of history, China was the dominant distance running nation under the tutelage of the very controversial coach, Ma Junren; his runners’ spectacular results came under much suspicion.

Ireland’s O'Sullivan was one of the few to take on his crew of distance runners, even though their spectacular results made any efforts to dethrone them daunting.

During the meet, O'Sullivan's parents were sitting just behind me and to the right. We had some pleasant exchanges about the competitions and greeted each other every day.

In the 1500m final, O'Sullivan charged down the straightaway and crossed the finish line.

Open she could, as her daughter had just won silver.

Mr. and Mrs. O'Sullivan left for the victory ceremony and were gone a long time.

When they returned, Mrs. O'Sullivan was carrying Sonia's bouquet of flowers.

I have told this story many times over the years, and long hoped to meet O’Sullivan and tell it to her myself. I even recounted it this morning when I compared Laura Muir’s hard-charging style to that of O’Sullivan.

This afternoon, 29 years after the race, I was at a track and field display on the University of Oregon campus.

“Excuse me,” I said to the woman standing next to me, “Are you Sonia O’Sullivan?”

I now have told my story twice today. 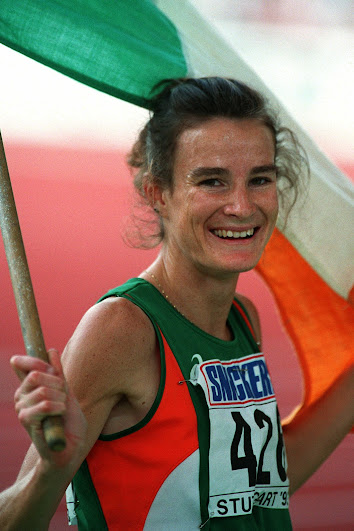